South Africa got their Fed Cup Group III campaign off to a winning start in Cairo, Eygpt on Thursday.

The format for the women’s tournament is┬á a found-robin with 10 nations in two pools. The top nation in each pool plays off against runner-up in the other pool, with two winning nations earning promotion to Europe/Africa Zone Group II for 2012.

Played on clay at the Smash Tennis Academy, the tournament’s first day saw South Africa beating Algeria 3-0 in their Group A round-robin clash.

Our top-ranked singles player, Chani Scheepers missed this tournament because she was in action in Madrid, Spain but Natalie Grandin and Chanel Simmons flew the SA flag in her absence.

Grandin beat Samia Medjahdi 6-1 6-2 while Simmonds was made to fight a little harder before accounting for Assia Halo 7-6 (4) 6-2. The two then combined in the doubles to beat Halo and Fatima Zorah Bouabdallah 6-3-6-4.

Pools and teams for the tournament are: 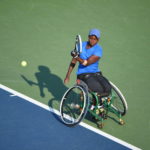 It’s Grand Slam No 12 for Montjane at US Open

Tokyo looms, again, We don’t know for sure in what shape of form the Olympics and Paralympics will take place in July to September and if anything 2020 taught us to take nothing for granted. What we do know is that if Tokyo 2020 +1 does go ahead, it will do so against a new-found back drop where simply taking… END_OF_DOCUMENT_TOKEN_TO_BE_REPLACED