Asefa Mengstu Negewu came back to the marathon that launched him on to the international stage last year to destroy a quality field, and successfully defend his Sanlam Cape Town Marathon title in almost perfect weather conditions on Sunday.

Kiplagat proceeded to pour on the pace and by halfway had extended his lead to 34 seconds over the chasing pack. He went through to the half marathon mark in 1hr 04min 29sec, with the pack clocking 1:05.03.

By 30km, the pack was chasing him down and had whittled his lead down to nine seconds, with Negewu driving the bus. But at 35km, Negewu threw down the gauntlet and pulled away from his rivals to cross the line in 2hr 10min 01sec

‘Defending my title was important to me. I’m really happy to be able to defend my title, as this race put me on the map’, said Negewu. ‘I was hoping for a faster time, I wanted to break my course record (2:08.42), but there was a bit of wind between 11 and 18 kilometres that slowed us down, and the guys didn’t want to work together. So if things go well I would like to come back next year and try and win the race for the third time and break my course record.’

Elroy Gelant, in his debut marathon was the best of the South Africans. Running a conservative race, he stayed off the leaders until the 30km mark before he tried to close the gap. In the end, though, running in man’s land for a longer period of time cost him and he slowed down in the latter stages of the race. Nevertheless, his 2:12.49 was good enough for fifth overall.

The women’s race saw some drama as pace maker Helalia Johannes of Namibia went out at a blistering pace, dropping the main protagonists by the halfway mark, which was reached in 1:15.22. Strung out behind her were all the race favourites some 38 seconds adrift. Running comfortably in that chase pack were Meserey Asefan, Betelhem Moges, Fantu Jimma and Agnes Kiprop amongst others. South Africa’s two-time Olympian Irvette van Zyl was content to sit roughly a minute further down.

By 35km it was clear that, pace making duties fulfilled, Johannes was going for the win and when she saw the finish line two kilometres out, she must have thought that the win was hers. But with less than a kilometre to go, she was caught by Betelhem Moges, who went on to win in 2:30.22, Johannes coming through six seconds adrift (2:30.28) and Agnes Kiprop third in 2:31.00.

‘I was looking for 2:27 or faster, but the pace between 10km and 25km was a bit slow, so I lost some time there’, said Moges. When asked if she was worried about the pace maker being so far ahead, Moges was a bit surprised that Johannes had stayed in the race for so long.

‘I was expecting her to pull out and was not aware that she was so far ahead, so I was surprised when I saw her in front of me. But I saw she was struggling and so I surged and caught her.’

Lungie Gonqa earned the provincial men’s title, with the race incorporating the Western Province Championships, finishing 17th overall in 2:24.31, and Ulrica Stander secured the women’s crown by finishing 14th in 2:54.08.

‘There’s no doubt now that the Sanlam Cape Town Marathon has established itself on the global stage,’ said race ambassador Elana Meyer. ‘We have IAAF Gold Label status and have seen times that we are not used to in South Africa. This can only be good for South African road running as the standard can only improve from here.’

The Cape Town Marathon, Africa’s most iconic marathon, boasted a mass field of just under 8000 entrants, cementing its position among the continent’s most popular road running events.

‘It’s incredible how quickly the Sanlam Cape Town Marathon has grown, with its IAAF Gold Label status making it the only marathon in Africa able to claim such a pedigree. It is phenomenal.

Yegs Ramiah, chief executive of brand at Sanlam, said ‘Congratulations to all the 2017 winners and each and every participant in this year’s Sanlam Cape Town Marathon.’

‘To be able to run in Africa’s first and only marathon to have gained IAAF Gold Label status is a historic achievement. As sponsor we are proud to be associated with all who have contributed to organising this race and contributing to its success.

‘For Sanlam, our investment in Africa in our brand and in this event, is based on successful partnerships and the belief that together we can unlock the true potential and talents of people across the African continent.’ 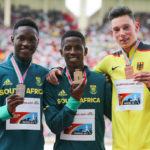 Golden end to U18 Championships as South Africa top table

Tokyo looms, again, We don’t know for sure in what shape of form the Olympics and Paralympics will take place in July to September and if anything 2020 taught us to take nothing for granted. What we do know is that if Tokyo 2020 +1 does go ahead, it will do so against a new-found back drop where simply taking… END_OF_DOCUMENT_TOKEN_TO_BE_REPLACED