Cycling’s 2009 Giro del Capo is changing from a five-day stage event to a series of four individual one-day races.
ÔÇ£We’ve run the event on the same format for the past 17 years. It would appear we have been in contravention of a UCI regulation of which we were unaware,ÔÇØ explained David Bellairs, co-director of the Cape Town Cycle Tour Trust. ÔÇ£Two weeks ago the UCI informed us that unless we comply with this clause, the event would be downgraded.ÔÇØ

ÔÇ£Compliance (in the form of a subsistence allowance for cyclists) would have cost about R900,000. It has been a tough year without a Giro sponsor so there was no way we could also carry this additional cost. The challenge we faced was a downgraded event (national tour) where we would only be allowed to enter three international teams. We had already confirmed the participation of a record 13 international teams, most of who are already in the country for early season training camps,ÔÇØ Bellairs continued.

ÔÇ£The Giro will now be run as a series of four UCI category ME 1.2 single day events. The event retains the same status but with a larger prize purse available to participants on a daily basis. All 13 international and 17 local teams will still be accommodated,ÔÇØ Bellairs added.

The races comprising, what will now be called, The PPA Cape Argus Giro del Capo Challenge are:

Teams will be permitted to field six riders per event but may chose a lesser number if they wish.

Hunter in a hurry 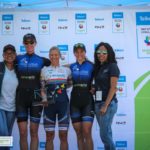 Hill and Bird blitz to dusi2c victory in Durban

By GARY LEMKE in Tokyo On the third day of staying in the Paralympic village bubble “it” finally dawned on me. “It” wasn’t the sheer visual aspect of the 4 000-plus Paralympians with disabilities all in the same environment of towering 17-storey apartments and surrounded by a 4km perimeter fence. Admittedly, that is the initial and most common conclusion of… END_OF_DOCUMENT_TOKEN_TO_BE_REPLACED