The South African National Archery Association (SANAA) held their championships in Grahamstown (RSA) earlier this month and SANAA was particularly pleased with the success of the inclusion of Para-Archery in the championships, having completed the integration in 2010.

Held under the new archery rules which became effective on 1 April, the event was well supported by the Namibian Archery Association who provided 15 archers in the compound men, compound women and compound cadet men categories.

The championships was used by SANAA to launch their ‘Give-it-a-Go’ programme, designed to be a pathway for their development programme and as a prelude to the FITA Feathers and Arrows programme.

The first day consisted of a FITA round, where archers shoot 144 arrows from distances varying from 90 to 30 metres. The winners of the various categories are declared the national championships. The second day is a ranking and qualification round where the aim is to find the top three archers in each of the main categories.

The final dates consist of eliminations, where archers compete for medals and where the top eight archers are invited to an elimination competition which determines the national teams.

Despite windy weather, the standard of the tournament, which was also the selection tournament for the World Archery and Para-Archery Championships, was high and well attended.

At the Annual Congress following the championships, Karen Hultzer, the 2011 SA Recurve Woman’s Champion has been elected National Coaches Chair (Recurve) by Council at the Congress meeting held today at Rhodes University, Grahamstown. Karen has represented South Africa at a number of international tournaments, including the World Archery Championships in Korea and the Continental Games in Egypt. ┬áAs a Protea archer and having earned national colours for the sport, Karen’s role is to build the recurve coaches capacity in the provinces.

Congress voted SANAA Treasurer Aurelle Medalie to captain the team to the USA and to the Para-Archery Championships, while national compound coach’s chair, Grant Gammon was appointed to captain the Youth World Championships. South Africa is currently ranked third in the World Team ranking and fourth in the Commonwealth. Many of the archers are ranked in the top 50 in the world.

At the Congress the new development pathway program, called “Give-it-a-Go” was launched. According to Dr Selwyn Moskovitz,┬á SANAA President, “We have found that the retention of budding archers is challenging, and that taking them directly into the Feathers and Arrows programme does not yield long term results leading to growth in archery. By developing a very basic pathway programme, which can take anywhere from two hours to two weeks to follow, we find that potential archers are more comfortable with the formal development program which sees the archer through the first two years up to tournament level.”

One of the legacies of the 61st SA National Archery Championships is that targets are supplied at no cost to clubs for development. ┬áPreference is given to rural clubs to reach out to disadvantaged and marginalised groups, including women, children, the youth, the elderly. One such club is the Nelsons Creek Archery Club of Paarl, in the Boland, who focus their efforts on archery with farm workers.┬áIn an innovative move, the club uses tyres as butts, and now will have target faces to use on their home made butts.

In the elimination invitation match, held in Johannesburg this past weekend which determines who will be the members to represent South Africa at the World Archery Championships, Gabriel Badenhorst of the Free State led the field with an unofficial world record (50m) of 704, followed by Lloyd Reeders with a score of 699 and Seppie Cilliers scoring 698. Badenhorst led the field with 16.6 points, Cilliers with 14.5 and Reeders with 14 points.

The team will warm up by competing in the World Cup (Stage 2, Turkey 6-12 June) and then proceed to the World Archery Championships in Italy between 3-10 July. ┬áThe full team in all categories will be announced as soon as the acceptance documentation has been finalised. 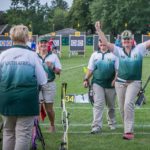 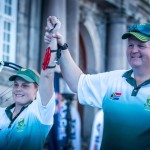 Patrick, Sera shoot their way to bronze for SA at World Championships

Tokyo looms, again, We don’t know for sure in what shape of form the Olympics and Paralympics will take place in July to September and if anything 2020 taught us to take nothing for granted. What we do know is that if Tokyo 2020 +1 does go ahead, it will do so against a new-found back drop where simply taking… END_OF_DOCUMENT_TOKEN_TO_BE_REPLACED