Sunday’s ninth stage of the Giro d’Italia in downtown Milano was ‘neutralised’ by the peloton in protest at what riders claimed to be an overly dangerous course.

Only the final 11.4-kilometre bell lap was really done at race pace, as the Garmin-Slipstream, Team Columbia-Highroad and LPR Brakes-Farnese Vini teams fought for their place up front, the Centenary Giro’s first maglia rosa Mark Cavendish finally getting the stage win he’s long been searching for – his team’s third successive victory and fourth of the race.

In a straight line, Quick Step’s Allan Davis can’t quite match the 23-year-old from the Isle of Man who claimed yet another podium place ahead of Garmin’s Tyler Farrar. Australia’s Matthew Goss (Team Saxo Bank) and double stage winner Alessandro Petacchi (LPR Brakes-Farnese Vini) rounded out the top five.

“There were stages I wanted to win [in the first week]. I had to make amends, I had to make it right [today],” Cavendish told cycling.news.com/

Cavenish was apparently the only big-name sprinter who wanted to race before the stage was neutralised, ad some will question the veracity of his victory Sunday.

“Obviously, I love to win. It’s an addiction. I’m usually set up in the best position to win. I launched my sprint early and launched full gas.”

Did he consider the conditions so dangerous, the stage necessitated neutralisation? ‘I don’t think it matters in the end what I thought,’ Cavendish said.

“It’s always a bit dangerous in the middle of big cities. Hopefully, we gave [the crowd] a big show,” continued Cavendish. “It’s a beautiful stage, a special stage. I think in the end, it worked out right; the time was neutralised, and everybody that did want to race got to race, and the people that didn’t want to race didn’t race.”

Sunday’s gentle day and the fact that Monday is an official rest day has effectively awarded the 190 remaining riders two consecutive days of rest before Tuesday’s much-anticipated 262-kilometre 10th leg from Cuneo to Pinerolo – not quite the stage it might have been the way organisers had originally planned it, but it should be a cracker nonetheless.

That the big hitters on the general classification will have more than recuperated probably won’t change things too much. As race leader Danilo Di Luca told Cyclingnews previously, the summit of the climb to Sestri├¿re is too far from the finish to attack, some 60 kilometres from the line; perhaps the short pinch to Pra’ Martino, the final categorised climb of the day and its GPM 10.5 kilometres from Pinerolo, provides a better springboard. 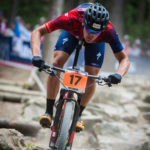 Another U23 World Cup podium for SA’s Hatherly

By GARY LEMKE in Tokyo On the third day of staying in the Paralympic village bubble “it” finally dawned on me. “It” wasn’t the sheer visual aspect of the 4 000-plus Paralympians with disabilities all in the same environment of towering 17-storey apartments and surrounded by a 4km perimeter fence. Admittedly, that is the initial and most common conclusion of… END_OF_DOCUMENT_TOKEN_TO_BE_REPLACED