Overseas fans will be banned from this summer’s Tokyo Olympics, organisers said Saturday, calling the decision disappointing but ‘unavoidable’ as they try to hold the Games safely during the pandemic.

The unprecedented ban will make the Tokyo Games the first ever without overseas spectatorst. The Games are shaping up to be a largely television event

In a statement issued after talks between local organisers, Japanese officials and Olympic and Paralympic chiefs, Games officials said the virus situation in Japan and abroad remained ‘very challenging’.

They said it was ‘highly unlikely’ Japan could guarantee overseas visitors entry by the summer, and therefore the ban on spectators from abroad was necessary.

Tokyo 2020 chief Seiko Hashimoto admitted the decision had not been easy.

‘I myself was an athlete. I had the pleasure of participating in the Olympics a number of times. So the fact that spectators are not able to attend the Games from abroad is very disappointing,’ she said.

But, she added: ‘We have to ensure a safe and secure environment for all the participants. It was an unavoidable decision.’

The US Olympic team called the decision ‘news we hoped would never come’, adding in a statement that they would ‘continue to advocate for opportunities for American fans to experience the Games in person’.

Tokyo 2020 chief Seiko Hashimoto admitted last week it will be ‘difficult’ for even the families of foreign athletes to attend.

Just how many domestic spectators will be in venues this summer has yet to be decided.

Organisers originally suggested they would rule on that by April, but Bach has said the decision could be pushed closer to the 23 July opening ceremony.

Whatever they decide, there’s no doubt that barring overseas fans will help make the Games a very different event from years past.

When the Games were postponed last year, organisers and Japanese officials had hoped that the pandemic would be receding by spring 2021.

They proclaimed the event would mark the light at the end of the pandemic tunnel, and a celebration of the end of a global crisis.

But even with vaccines rolling out in much of the world, the virus continues to cause havoc, and the narrative from Olympic officials looks to be changing. 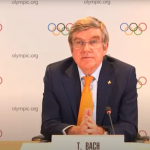 ‘No overseas spectators’ at Tokyo Games

Tokyo looms, again, We don’t know for sure in what shape of form the Olympics and Paralympics will take place in July to September and if anything 2020 taught us to take nothing for granted. What we do know is that if Tokyo 2020 +1 does go ahead, it will do so against a new-found back drop where simply taking… END_OF_DOCUMENT_TOKEN_TO_BE_REPLACED