The South African men’s side may have booked themselves a berth in the 2010 World Cup in New Delhi but that doesn’t mean the heat is off.

South Africa beat old rivals Egypt 3-1 in the final of the Africa Cup of Nations tournament in Accra, Ghana to seal their Cup spot — now it’s back to the grindstone.

Says coach Gregg Clark, back from a hot and humid Accra: “Now we have the inter-provincial tournament in three weeks time in Pietermaritzburg, KwaZulu-Natal and after that many of the players will probably head back abroad to hook up with their respective clubs in Europe and the United Kingdom.

“We have a training camp in the last week of October where we’ll be reselecting a squad after the inter-provincial. The camp will be preparation for the Champions Challenge in December.”

Salta, Argentina is the venue for the December 13-16 Challenge tournament (eight teams in total) and is for the teams that finished seventh to 12th at last year’s Beijing Olympics (South Africa propped up the 12 teams).

They’ll be joined by the host country Argentina as well as Poland, who won the Champions Challenge Tier II tournament recently

“Then in January next year we hope to host some overseas competition (funding dependant),” says Clark. “Germany already keen to come here in January to train here for the World Cup), and the March is the World Cup in New Delhi.” 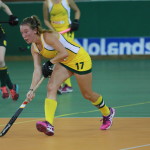 Evans nails three as SA indoor side down Aussies

SA look to wrap series up against Malaysia

Tokyo looms, again, We don’t know for sure in what shape of form the Olympics and Paralympics will take place in July to September and if anything 2020 taught us to take nothing for granted. What we do know is that if Tokyo 2020 +1 does go ahead, it will do so against a new-found back drop where simply taking… END_OF_DOCUMENT_TOKEN_TO_BE_REPLACED