Despite giving it his absolute all Robbie Hunter and his Garmin-Transitions team-mates were unable to stop British sprinter Mark Cavendish winning the fifth stage of the Tour de France on Thursday.

South African Hunter and teammates David Millar and Julian Dean had set up American Tyler Farrar but were unable to prevent HTC-Colombia’s Cavendish from kicking through to the win.

The man they call the Manx Missile covered the 187.5km stage between Epernay to Montargis in 4hr 30min 50sec.

And despite being in the mix until metres from the line, Hunter was left in 145th spot as the field swamped the finish, but given the same time as the winner.

The day’s developments saw Hunter and his Garmin-Transitions team lose hold of their lead in the team category. They now lie in 10th spot.

In the General Classifications, not a lot has changed with Team Saxo Bank’s Fabian Cancellara still tops, the Swiss holding a 23sec advantage over Sky’s Geraint Thomas and 39sec over Aussie Cadel Evans.

Hunter meanwhile finds himself down in 105th, two spots up from Wednesday’s stage and still 8:57 off the front.

“We gave a great lead out today,” he said on his Twitter feed. “It just all went wrong in the last metres, happens sometimes. We came to sprint for Ty, so that’s what we’re doing.

“Ty might be banged up but it takes a lot of courage just to put your hand up (broken as well) and say: Hey guys let’s give it a go. We did good! Also just cause Cav never won yesterday (Wednesday) u never saw HTC or Cav leading out Renshaw. We got a plan in Ty and it will pay off. We know our jobs.”

Friday’s sixth stage is the second longest stage of the tour, a 227.5km haul between Montargis and Gueugnon and with much of it being ridden on the flat plains of Burgundy it looks set up for a breakaway effort.

Viljoen in fine form before champs 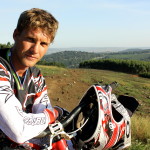 Another milestone for Kevin Evans

Tokyo looms, again, We don’t know for sure in what shape of form the Olympics and Paralympics will take place in July to September and if anything 2020 taught us to take nothing for granted. What we do know is that if Tokyo 2020 +1 does go ahead, it will do so against a new-found back drop where simply taking… END_OF_DOCUMENT_TOKEN_TO_BE_REPLACED