Following the disappointment of a 20th-place finish in the 470 sailing event at the Rio Olympics, Asenathi Jim is back in the boat and ready to power his way towards Tokyo 2020.

His teammate in both Rio and London 2012, Roger Hudson, has now stepped into a talent identification and coaching role, while Jim will be joined in the boat by Sibu Sizatu at the 470 World Championships, which get under way in Greece this week.

Both Jim and Sizatu are supported by the Cape Town-based RaceAhead Foundation.

‘Rio was obviously a big disappointment for myself and Asenathi. We felt we missed a great opportunity and let ourselves and our supporters down. The emotions that came with that for both of us were hard to handle for a time,’ admitted Hudson.

‘Our knee-jerk reaction was that we wanted to find a way to put it right again, but Olympic sailing revolves in a four-year cycle and you can’t do much in the short term to fix such a problem. The first real opportunity to make amends is the next world championship.

‘Our direct mission here in Greece is to achieve the best possible result at the 470 World Championship with our team of Asenathi and Sibu, who are both 25 years old.’

The South African team is one of 30 competing in the men’s competition, with 160 sailors taking part from July 7-15.

‘Sibu has been training with RaceAhead since 2012. He is a versatile sailor who has good skills in both positions on the 470, helming and crewing. We decided in January of this year to push Sibu’s development specifically for the crewing role at this year’s world championships. I spent a lot of time with Sibu on the boat in training between January and April, directly coaching him in the techniques and skills of 470 crewing.

‘After a long post-Rio break, Asenathi rejoined our training on March 1 and since then, Sibu and Asenathi have been working hard at developing their synergy in the boat.

‘Asenathi is a very skilled and experienced sailor by international Olympic standards. He has the potential to go all the way to the top, long term. At this 2017 Worlds Asenathi and Sibu have the potential for a good result, but wherever they finish, they will grow as sailors through this experience,’ said Hudson.

‘Sibu will gain top quality international racing experience and Asenathi will benefit from taking on more tactical responsibility and leadership within the new partnership. A top-40 finish would be an acceptable result, a top-20 finish would be very satisfying for us and a top-10 would be outstanding and would probably have a big impact on South Africa’s sailing prospects at Tokyo 2020.

‘I’m here with the guys to continue doing all I can to support them on and off the water. We’ve walked a long road together and all three of us are really looking forward to this event.’

Also representing South Africa at the 470 World Championships for the first time will be a young women’s team of 19-year-old Tammy Holden and 16-year-old Leah Smit.

‘Tammy put in a good performance at the 2015 Youth Worlds in the 29er class, showing some talent. In terms of results, they don’t have any experience yet in 470 racing and they are certainly diving in at the deep end by going straight to an open world championship. It can only be a massive learning process for them, which should be a very good thing,’ said Hudson. 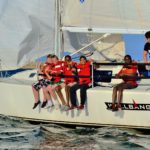 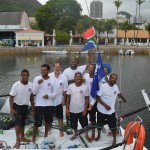 Despite setbacks Gryphon grabs 10th spot in Cape to Rio

By GARY LEMKE in Tokyo On the third day of staying in the Paralympic village bubble “it” finally dawned on me. “It” wasn’t the sheer visual aspect of the 4 000-plus Paralympians with disabilities all in the same environment of towering 17-storey apartments and surrounded by a 4km perimeter fence. Admittedly, that is the initial and most common conclusion of… END_OF_DOCUMENT_TOKEN_TO_BE_REPLACED