Rio Olympics bronze medallist Henri Schoeman will be in action on local soil once more when he lines up for the Discovery Triathlon World Cup Cape Town event in the Mother City.

‘You can’t really get any better than a clean sweep of the podium,’ recalled Schoeman ahead of Sunday’s race to be staged over a 750-metre swim, 20-kilometre bike leg and 5km foot run.

‘Sunday is the first in the series so this year I’m just planning on executing to the best of my abilities and eliminating any early season mistakes.

‘It’s basically just to check out my shape ahead of April’s Commonwealth Games and seeing what I need to do to get to peak form.’

The World Cup series has steadily grown over the years and increased to 17 events around the world, compared to 10 stops in 2016.

With Cape Town experiencing a debilitating drought race director Gary Marescia also went to great lengths to say that the event is going to be a completely water-neutral event and will have no impact on the city’s valuable water resources.

Sullwald won’t be making the trip south from Bela Bela this weekend, still not ready to race at the highest level after a traumatic armed attack at the family home late last year. ‘I’m focusing hard on the Commonwealth Games right now and my first race will be 25 March, the World Cup event in New Plymouth, New Zealand,’ he said on Friday.

Also in action will be Gillian Sanders, like Murray and Schoeman, a silver medallist in the team event at the last Commonwealth Games in Glasgow, Scotland.

‘That team prize at Commies was a definite career highlight for me,’ said the London-based athlete who comes into the event on the back of a quality training spell in Windhoek, Namibia.

‘We were definitely underdogs in Glasgow so to medal was very special. Naturally we’d like go one better in Australia this year.’

Sanders, a lawyer by trade, emphasized the need to be fully professional at the highest level. ‘During peak training we fit in 5-6 hours of training a day and if one had to work full-time there simply wouldn’t be time for the vital recovery.’

Picture of Schoeman in action courtesy of ITU/Delly Carr 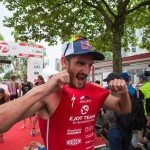 Murray bags back to back Bundesliga titles

Tokyo looms, again, We don’t know for sure in what shape of form the Olympics and Paralympics will take place in July to September and if anything 2020 taught us to take nothing for granted. What we do know is that if Tokyo 2020 +1 does go ahead, it will do so against a new-found back drop where simply taking… END_OF_DOCUMENT_TOKEN_TO_BE_REPLACED