Lee-Anne Pace defied wet and windy conditions at Kingswood Golf Estate on Saturday to open up a comfortable lead over the chasing pack in the Sunshine Ladies Tour Dimension Data Ladies Pro-Am.
Pace fired a solid four-under-par 68 to move to nine under 135 and the Chase to the Investec Cup for Ladies leader will start the final round at the Outeniqua course at Fancourt with a three-stroke cushion over Rebecca Hudson from England.
The Chase to the Investec Cup for Ladies winner at Houghton three weeks ago moved into sole second with a three under 69.
Defending champion Stacy Bregman lags five off the pace in third after a three-putt double bogey saw her sign off with a two under 70.
Hudson and Bregman will have their job cut out to catch Pace, who is looking to extend her domination on the local circuit with a ninth successive victory.
The 35-year-old made quick work of a one shot overnight deficit on Eaton with a birdie start.
She wiped out a pair of bogeys at two and three with a trio of gains at four, seven and eight in a strong south-westerly wind to reach the turn in two under.
Pace dipped nine under par with back-to-back birdies at 11 and 12 and reversed a bogey at 15 with birdie at the par five 16th to finish well in front.
‘I think I was just a little unfocused at the start of the round, but I snapped out of it quickly after dropping two shots on the trot,’ Pace said.
‘This course has a lot of blind spots and the greens are really fast, and a lot trickier than usual in the wind, but my irons saved the day. I don’t think I had a putt outside 10 feet and I had a few tap-ins, as well.
‘The four birdies around the turn gave me a little breathing space, but I lost a little focus over the putt at 15 and ended up three-putting. Fortunately I could reverse it with a birdie at 16.’
Although she admits a three-shot cushion is a nice lead, Pace is not convinced it’s enough to stave off challenges from Hudson and Bregman.
‘Rebecca is very experienced and she has a very accurate game,’ Pace said. ‘She doesn’t make many mistakes and she is cool under pressure. Stacy played very solid today and she got it to six under before 18, so I expect her to come out firing on Sunday.
‘So I am certainly not going to start celebrating just yet; I need to get the job done first.’
Hudson also burst from the blocks with a birdie and negated a bogey at five with birdie at the short sixth and turned one under. The four-time Ladies European Tour champion traded a birdie at 10 for a bogey at 13, but reeled in a pair of gains at 15 and 16 to close the gap on Pace.
‘The wind was a bit tricky, but the rain didn’t bother me too much,’ Hudson said.
‘I was pretty solid over the first 12 holes, but a three-putt bogey at 13 almost spoiled my day. I was pretty happy to chip in from 10 yards for birdie at 15.
‘I had 140 yards to the pin at 16 and I punched an eight-iron to 10 feet and made the birdie putt. The two birdies took the sting out of that silly miss at 13.
‘It’s great to be in a strong position to challenge in the final round. Lee-Anne is tough and she hits it a lot longer than me, but I’m looking forward to going toe-to-toe with her tomorrow.’
Meanwhile Maria Beautell also showed some great form with an early charge.
The Spaniard reeled in four consecutive birdies from the second hole, but lost the advantage with a quartet of bogeys at seven, eight, 12 and 18.
Beautell signed for an even-par 72 to finish six off the pace at three under in a tie with 2014 champion Monique Smit, who returned a 73.
First round leader Melissa Eaton was the only other player to finish in red numbers.
The Port Shepstone golfer turned five over, but shaved two shots off her deficit with birdies at 15 and 17 for a 76 and sole sixth on two under 142. 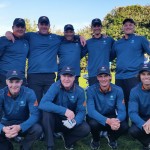 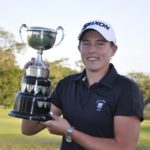 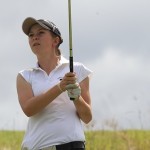 SA’s Strauss gets ever closer to LPGA Tour spot

Tokyo looms, again, We don’t know for sure in what shape of form the Olympics and Paralympics will take place in July to September and if anything 2020 taught us to take nothing for granted. What we do know is that if Tokyo 2020 +1 does go ahead, it will do so against a new-found back drop where simply taking… END_OF_DOCUMENT_TOKEN_TO_BE_REPLACED