Lee-Anne Pace joined an elite band of back-to-back SA Women’s Open champions when she claimed the sought-after title for a second consecutive year at San Lameer Country Club on the Hibiscus Coast in KwaZulu-Natal on Tuesday.
The Pearl Valley golfer closed with a 76 to claim a three-stroke victory on three over 219 to emulate American Brenda Lunsford and Barbara Pestana from South Africa, who reeled in successive victories in 1990/1991 and 1998/1999 respectively.
‘Now I am really stoked,’ said Pace. ‘I just love statistics and setting records, so this is really, really cool. I knew there were players that won the SA Women’s Open twice, but I never Brenda and Barbara were the only back-to-back winners.
‘And I know Mandy Adamson won three times, but not three times in a row. I’m definitely going for the hat-trick next year. That would be an awesome record to own.’
Pace carried a healthy eight-stroke lead in to the final round after earlier rounds of 71 and 72, but was made to work for her second success.
She parred her way to the turn as rookie Carrie Park shortened the gap to five strokes with four birdies on the front nine and leading amateur Lejan Lewthwaite also got within five with birdies at one, four and eight.
‘Those girls really gave me a run for my money, and Kim Williams also played really well,’ Pace said. ‘I played solid golf, but the birdie putts were just not dropping.’
Pace bogeyed 11 and three-putted for a double at the par-four 12th that should have opened the door for the younger generation, however, the savage north-easterly wind showed up in full force to ruin their title hopes.
Park dropped shots at 11, 14 and 15 and Lewthwaite made a triple at the par-four 11th.
Although Pace dropped another shot at 15, the nine-time European Ladies Tour champion’s experience won out. ‘The first nine holes were fine, but we played straight into a two-to-three club wind on the back nine, especially over the last five holes,’ said Pace.
‘Lejan played incredible golf and she is really a talent to watch in the future and I was also impressed with little Carrie Park. What a great debut for her. I also really enjoyed seeing Kim getting back to the kind of form with which she used to dominate the amateur scene.
Pace was happy to make the perfect start to the Chase to the Investec Cup for Ladies and her title defence at Millpark next year. ‘I am really glad that I came back from the LPGA Tour to defend my title and to start the Sunshine Ladies Tour with another big win,’ Pace said.
‘The course was absolute exquisite. Last year we had a lot of rain and we could attack the pins, but not this year – it definitely played tougher. I just need to come to grips with that back nine when the wind is up, but I look forward to chasing the hat-trick next year.’
Lewthwaite returned an even-par 72 to win the Jackie Mercer Trophy as the leading amateur on seven over 223.
Reigning Sanlam SA Women’s Amateur champion Park also carded a 72 to lock down the runner-spot in the pro field on 224 in her rookie debut. 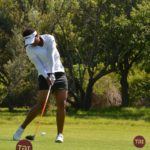 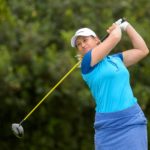 Du Toit through to matchplay but Myeki exits

Tokyo looms, again, We don’t know for sure in what shape of form the Olympics and Paralympics will take place in July to September and if anything 2020 taught us to take nothing for granted. What we do know is that if Tokyo 2020 +1 does go ahead, it will do so against a new-found back drop where simply taking… END_OF_DOCUMENT_TOKEN_TO_BE_REPLACED