Jessica Pengelly has another dream. And when she dreams, she dreams big, and her dreams tend to come true. Now into her Grade 12 year at school, the 17-year-old from Somerset West is already thinking ahead. Not too far ahead, mind you, though she has her heart set on the Fina World Championships, scheduled for Rome in July.
First though there are the small matters of squeezing in her final year of schooling with an arduous training schedule and also the South African Nationals in Durban in April, where she will again bump into her rival and friend, Kathryn Meaklim. Together, these two look like pushing one another faster and faster, until they gatecrash into the top tier of 400m individual medley swimming.
Pengelly is defending champion in the 200 and 400m individual medley from last year’s Nationals, but it is Meaklim (herself just 19) who is helping to ignite the rivalry. In that 400m IM Pengelly was forced to dig deep to hold off the faster-finishing KwaZulu-Natalian and both went inside the existing national record, as the Cape swimmer won by just 0.04sec.
That helped both qualify for their first Olympics ÔÇô and it has to be said that the pair will already have been identified now by governing body SASCOC as potential medal prospects in London 2012. That may sound like an ambitious statement, and it is, but their performance graphs suggest they have what it takes, given normal development.
Meaklim contested both the 400m IM and the 200m butterfly in Beijing; she produced a┬á 4min 37.11sec in her 400m IM heat and was unable to get to the semi-finals, but in the butterfly she won her heat (2:09.41) but failed to make the final. The experience however will stand her in good stead … one should not lose sight of the fact that in her first Olympics, as a scholar in 1992, Penny Heyns ended 34th and 33rd in the 100 and 200m breaststroke. Four years later she collected double gold.
Pengelly’s form pleased her in Beijing (her 400m IM time of 4:41.04 was a South African record, but showing how high the bar is, she was unable to make the semi-finals). However, an Olympics has so many dynamics and distractions, though Pengelly maintained her focus. It really can be an intimidating atmosphere and more often than not just the galaxy of international stars from across 28 codes all walking around in the same village has a profound effect on a young athlete.
‘Nothing compares with going to the Olympics,’ Pengelly reflected. ‘The (Olympic) village was so big and everyone was always so busy that you hardly had any time to focus on anything other than the events. In terms of new friendships, well I am on good terms with everyone in Team South Africa. We’re a close group.
‘But I learnt so much in Beijing. I was happy with my performances (and I produced that PB in the 400m IM), but apart from the swims it was an incredible life-changing experience. Watching Michaael Phelps swim was amazing and seeing the swimmers smash world record was unbelievable. It made me realise just how far I have to go to get where I want to be.’
And where she wants to be is on the podium in London, with hopefully a few other trips in between at other international meets.

Check out the official SASCOC magazine currently on sale at all leading retailers for R29.95 for this story and more. 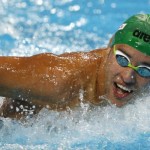 Le Clos gives SA hope for another medal in Russia

Jessica gets more gold for SA