Swimming legend Michael Phelps struggled in his attempt to adapt to the old-style racing suits at the World Cup short-course event in Stockholm, Sweden Tuesday.

The 14-time Olympic gold medal winner qualified for finals in only one of three events in Stockholm, his best result being seventh of eight to go through in the men’s 100 metre medley.

Racing for the first time since winning five golds and a silver at the world championships in July, the American missed out on the 100m freestyle after qualifying in 16th of 23 competitors.

His time of 47.77 seconds was 1.84 seconds slower than the leading mark set by Sweden’s Stefan Nystrand.

The 24-year-old, who was disqualified in the 100m backstroke, set a time of 53.13 seconds in the medley. The fastest man was South African Darian Townsend, who came home in 52.48.

Also flying the flag for South Africa was Roland Schoeman in the men’s 50m butterfly which he won in a new World Cup record of 22.29. In the 50m breaststroke, team-mate Cameron Van Der Burgh fell just 0.1sec shy of his world record to win in 25.68 ahead of Brazil’s Felipe Silva, on 25.87, with Roland Schoeman third on 25.88.

Phelps was one of the few swimmers to revert to the old-style suits, which will become mandatory after January 1 as world ruling body FINA seeks to rein in the high-tech costumes which have sent records tumbling at an incredible rate in the past two years.

He will swim in the 100m butterfly and 200m medley heats on Wednesday, and then head to the next leg of the World Cup in Berlin at the weekend.

Chinese swimmer Jing Zhao set a new world record in the heats of the women’s 50m backstroke, clocking 26.08 seconds. She beat the mark of 26.17 posted by Australia’s Marieke Guehrer in the previous meet of the series in Moscow on November 6.

Other events that featured South Africans were the 400m medley won by Joe Roebuck, of Britain in 4:03.20, with second place going to Durban’s Chad Le Clos, on 4:04.19.

The women’s 200m medley went to Spain’s Mireia Belmonte in 2:06.44, a touch outside the shiny suit world mark of 2:06.01 set by Hungarian Evelyn Verraszto in Moscow last weekend with South Africans Melissa Franklin (2:07.16) and Kathryn Meaklim (2:07.54) second and third respectively. 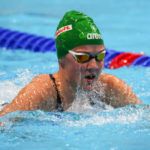 Corbett eager to get back in the water

Tokyo looms, again, We don’t know for sure in what shape of form the Olympics and Paralympics will take place in July to September and if anything 2020 taught us to take nothing for granted. What we do know is that if Tokyo 2020 +1 does go ahead, it will do so against a new-found back drop where simply taking… END_OF_DOCUMENT_TOKEN_TO_BE_REPLACED