The SPAR Proteas continued to signal to the netball world that they are on the rise with a tenacious performance against the world’s No2 team, the Silver Ferns, in New Zealand on Wednesday.
Although the final score-line was 65-46 in the New Zealanders’ favour, the Proteas displayed a new confidence and commitment to lead the Silver Ferns, by up to four goals, well into the second quarter of their Netball Quad Series clash.
‘We let the world know we are prepared to challenge everyone on every team,’ Proteas coach Norma Plummer said after the Test match, played in Hamilton. ‘We signalled it here tonight, as we did against Australia last weekend.
‘It’s such a great effort, and they’re proving that getting that exposure to the top three teams in the world is the secret to their growth.’
After going down to the world champions Australia by 25 goals in the series opener four days ago, the Proteas came out blazing, and caught the new-look Silver Ferns on the hop. But inexperience in this intensity of international netball told on the South Africans in the second half, as the New Zealanders only grew in stature.
Nevertheless, Proteas captain Bongi Msomi was delighted with her team’s continuing improvement, but still mindful there is only room to get better in their next Test against the England Roses in Melbourne on Sunday.
‘I think all of our girls really stepped out tonight, and I’m really proud of the Proteas,’ she said. ‘It’s definitely very hard for us to play against such teams, but this is part of our learning process. We still have to work hard on our consistency. But it’s definitely making a difference.’
The Proteas made a dream start, stealing a three-goal lead halfway through the opening quarter, which grew to four, as they maintained the intensity and strengthened their connections through court.
Circle defenders Karla Mostert and Phumza Maweni were constantly on the hunt, keeping the New Zealand shooters unusually quiet. Midcourters Precious Mthembu, Erin Burger and Bongi Msomi worked the ball smartly and cleanly to shooters Renske Stolz and Lenize Potgieter, who were not afraid to put up their shots from all ranges.
Potgieter showed improved poise under the post, ending the game with a notable 33 goals from 38 attempts.
After leading 16-14 at the first break, the Proteas continued to push the Silver Ferns, with the untiring Burger driving the play at centre. Burger and Mostert had bagged four crucial intercepts between them before halftime.
The New Zealanders found their rhythm halfway through the spell, using the zone defence to better effect, to lead 32-27 at halftime.
After reminding her team they had nothing to lose, Plummer introduced fresh legs in the form of Izette Lubbe at wing attack and Zanele Vimbela at goal defence. The changes had an immediate effect, as the Proteas closed the gap to two. But the Silver Ferns’ attack developed in self-assurance, speed and accuracy, to build a 46-38 advantage at three-quarter time, before stretching the difference even further in the final stanza.
Determined to give as many of her players the opportunity to further their exposure to top international netball, Plummer also gave court time to goal attack Lindie Lombard and goal keep Jeanie Steyn before the final whistle blew.
Silver Ferns captain Katrina Grant praised the Proteas for taking the game to them. ‘South Africa did a really good job on us tonight,’ she said. ‘Our defence got caught chasing a bit, and on attack, when they got that ball moving, it looked pretty impressive. We really had to wear them down.’ 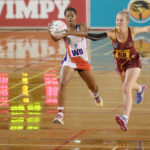 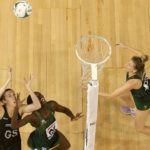 Proteas up their game again to push Kiwis to the end 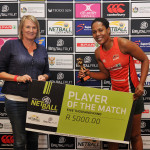 Aloes secure BFNPL seventh spot as they bounce the Baobabs