Wilco Nienaber holed two massive putts at the 18th – one in regulation play and one on the third play-off hole – to secure a dramatic victory in the Free State Open on Sunday.

The Free State junior evoked the steely winning resolve that saw him collect 11 trophies in 2017 and denied South Africa’s No1 ranked amateur Garrick Higgo a winning start to the Open Amateur season in an enthralling final day at Bloemfontein Golf Club.

Nienaber’s victory was the first by a Free State golfer since Jbe’ Kruger last lifted the trophy in 2006.

Higgo set the first round target with a seven-under-par 65, but Nienaber leapfrogged into the second round lead with a sizzling nine-under 63. The Grey College scholar started the third round with a four-shot advantage and kept control with another 68.

Higgo, however, wiped out a six-shot deficit when he made five birdies in a row from the 14th for a 63 of his own to pull within a shot of the leader. He fired a 66 in the final round, but Nienaber forced the tournament into extra time when he closed with a 67.

The two 17-year-old GolfRSA National Squad members shared the lead on 22-under-par 266 at the end of regulation play.

‘I turned four under, but the putter went cold on the back nine,’ said Nienaber. ‘I hit it close, but the putts wouldn’t drop. I had birdies at 15 and 16, but made a really stupid double bogey at 17 without losing a ball. I hit it in the hazard right and chipped it across the fairway into the rough and it was downhill from there.

‘I started well in the final round with a birdie at the first. We both birdied the third and Garrick levelled the score with back-to-back birdies at five and six. I had nine straight pars before another birdie at 13 and Garrick pushed a stroke clear with birdies at 13 and 14.

The first play-off hole was the par-three 16th, with water on both sides of the green.

‘My tee shot finished four metres short of the pin, tucked on the left,’ said Nienaber. ‘Garrick found the bunker and he hit his trap-shot six foot past the flag. My birdie putt stopped on the edge of the hole and Garrick boxed his par-putt to extend the play-off.

‘We both made par at 17. I went with a 3-wood off the tee at 18, but I came out of the shot and it went high and right. I had 245 metres left and Garrick had about 160m after a really good drive. I hit a 4-iron straight at the flag, but it wasn’t enough club and I finished just short of the bunker.

‘Garrick was on the green for two. I hit my chip to 12 feet and Garrick’s eagle putt came up short. I knocked my putt in for birdie and he missed his birdie putt. It was a really tense battle with Garrick, but it was fantastic. I love to play Garrick, because he really pushes you to your limits. He just never gives up.

‘I’m really pleased that I started the season the way I left it off last year. This win puts me another step closer to my goal of representing South Africa. I’ve moved to fourth in the Open Amateur Rankings, so I just need to keep pushing. A huge thanks to my parents, my coach Quintin Williams, GolfRSA and SAGA and the Free State Golf Union, who gave my career a great start.’

Picture of Nienaber courtesy of GolfRSA 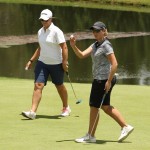 Simon and Smit on song at Houghton 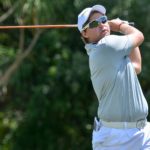 McClatchie ready for US Amateur ‘marathon’ 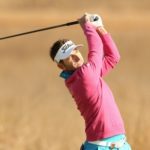 Kruger claims the lead at Serengeti