After a day of relaxation following their thrilling match against England on Saturday, the SPAR Proteas were hard at work on Monday preparing for their Quad Series match against world champions Australia on Tuesday night.

Fifth-ranked South Africa forced third-ranked England into extra time, drawing 48-all at fulltime. The more experienced England Roses won the match by 60 goals to 55, but the Proteas could hold their heads high after storming back from an eleven-goal deficit at halftime.

Head coach Norma Plummer said they had watched video footage of the match and analysed where they had gone wrong and what they needed to work on.

‘Our start wasn’t good and we weren’t on the money on the shots. We were letting ourselves down and we weren’t converting, so those are two of the areas we will work on,’ said Plummer.

She said she would not necessarily have the same starting line-up for the match against Australia. ‘I’m running the third end players at the moment,’ she said.

Assistant coach Jenny van Dyk said there was a vast difference between England and Australia. ‘The Aussies have been at the forefront of netball for quite a while and the amount of match opportunities they have is really what sets them apart,’ said Van Dyk.

‘We will spend time this afternoon planning our strategy for the Australian match, and working on our own game plan.

‘As much as we did well against England, tomorrow is going to be much tougher said assistant coach Dumisane Chauke. ‘We’ve been playing more with the top three in the world, and the more we play them, the better we’ll get.   We’ll be focusing on what we can do as a team and keeping the South African flair will do wonders for us.

‘We’re probably going to focus on the goal circle players and getting the feeds into the circle. Playing the triangle and forcing our goalshooters not to move around so much, but to play to their strengths.

‘Lenise Potgieter is the standing, holding shooter and we’ll be focusing on that in preparation for tomorrow’s game,’ said Chauke.

The match will be played at the Durban International Convention Centre at 7pm on Tuesday. The Proteas set off almost immediately after that for the United Kingdom, where the fourth and final leg of the SANZEA Quad Series will be played.

Picture of the Proteas squad courtesy of Reg Caldecott 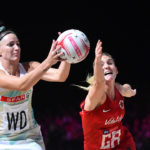 So close as Proteas lose thriller 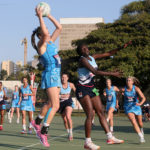 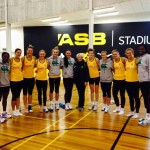 Proteas lose to Silver Ferns but take plenty out of defeat

Tokyo looms, again, We don’t know for sure in what shape of form the Olympics and Paralympics will take place in July to September and if anything 2020 taught us to take nothing for granted. What we do know is that if Tokyo 2020 +1 does go ahead, it will do so against a new-found back drop where simply taking… END_OF_DOCUMENT_TOKEN_TO_BE_REPLACED