Rahme produced a career best 5.50 metres at the Yellow Pages SA Youth and Junior Track and Field Championships held in Germiston last weekend and will be looking to clear 5.60 between now and the world junior event in order to join the shortlist for potential Commonwealth Games selection.

Outeniqua High pupil Smith ÔÇô with a career best of 57.13 metres awaiting ratification as a national record at the next ASA Council Meeting, took the gold medal at last weekend’s national championships with 55.25. This gave her to a third gold medal of the season having taken top spot at the national schools championships and senior title at the Yellow Pages SA Senior Track and Field Championships.

ASA Administrator Ray Mali offered congratulations to the selected athletes and said: ÔÇ£SA athletics has always had a vast range of talent at junior level and once again our young track and field athletes will have the opportunity of matching their skills against the best in the world when they compete at the IAAF World Junior Championships in Canada in July.ÔÇØ

ÔÇ£To assist the athletes in their final preparation ahead of the 2010 IAAF World Junior Championships, ASA will endeavour to organise competition opportunities during the month of June 2010. The squad announced today also forms a part of ASA’s medium term preparation for the 2012 Olympic Games in London.ÔÇØ

Mali added that the final team to the 2010 IAAF World Junior Championships will be announced on Wednesday 30 June 2010.

ÔÇ£Athletes not listed on the national squad announced today, can still qualify for the 2010 IAAF World Junior Championships provided that they meet the selection criteria during the ‘window period’ in June 2010,ÔÇØ added Mali. 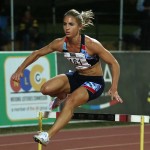 SA hurdles duo take their next step towards Rio