The in-form Ruben Ramolefi produced the stand-out performance at Friday night’s Yellow Pages track and field meeting in Stellenbosch.Ramolefi raced to an impressive victory in the men’s 3000m steeplechase in 8min 22.7sec, which was inside the qualifying time for the IAAF world championships later this year.

Virtually running on his own against the clock, Ramolefi finished a full 20 seconds ahead of the second-placed man, Sikhumbuzo Seme.

However, the race of the night was the men’s 1500m where Olympian Juan van Deventer got to the line first ahead of 800m star Mbulaeni Mulaudzi with Lloyd Bosman a brave third.┬á

It was good to see the 1996 Olympic silver medallist Hezekiel Sepeng back in action, but he had to settle for fifth spot in a slow 800m race won by Andre Olivier (1:47.0)

In other headline displays, while the country’s only medallist from the Beijing Olympics, long jumper Khotso Mokoena, predictably picked up a victory, though his distance of 7.8m was a long way off his best. Elsewhere, Janus Robberts pushed the shot to 20.2m. Thuso Mpuang recorded a sprint double, in 10.5sec and 21.06sec (both races were into a slight headwind). 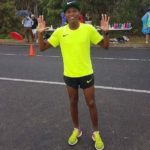 Shange takes second in last race Down Under

By GARY LEMKE in Tokyo On the third day of staying in the Paralympic village bubble “it” finally dawned on me. “It” wasn’t the sheer visual aspect of the 4 000-plus Paralympians with disabilities all in the same environment of towering 17-storey apartments and surrounded by a 4km perimeter fence. Admittedly, that is the initial and most common conclusion of… END_OF_DOCUMENT_TOKEN_TO_BE_REPLACED