It had to happen sooner or later and in hindsight top triathlete Richard Murray will be thankful that his failure to finish a big event happened at the weekend, rather than later in the year.

Murray, who dominated the BSG-Energade series last year and also got a second spot in a World Cup event in Huatulco, Mexico, dropped out of the Africa Cup event in Port Elizabeth.

He could only watch as he recorded his first DNF (Did Not Finish) in a big event and foreign athletes filled the first two places and young Wian Sullwald snatched up the SA elite title, raced in conjunction with the Africa Cup event.

Murray was in contention during the 1500-metre swim and on his KTM bike during the cycle leg of 40 kilometres but it was early in the run leg that trouble hit.

“Doing a 40km time trial trial is not really fun in the wind,” reflected Murray on Monday. “I think as I was bent over and took in some energy gel all the sugar hit my stomach at once..

“I was suddenly struggling to run at four minutes a kilometre so decide to pull out as I wasn’t going anywhere.”

But Murray, from Cape Town but currently based in Pretoria, will be hoping to be back up to pace at African Championships in Mauritius at the end of the month. “For sure and then I’m also looking very forward to the Sydney World Series event coming up. That’s a biggy and I certainly can’t afford to miss the pack in a race like that.” 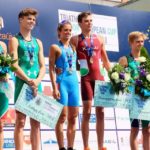 SA trio in the medal mix at European triathlon events

Tokyo looms, again, We don’t know for sure in what shape of form the Olympics and Paralympics will take place in July to September and if anything 2020 taught us to take nothing for granted. What we do know is that if Tokyo 2020 +1 does go ahead, it will do so against a new-found back drop where simply taking… END_OF_DOCUMENT_TOKEN_TO_BE_REPLACED