Downed but not down and out… that just about sums up Rik de Voest’s experience of the Soweto Open which ended on Sunday.

De Voest fought his way through to an all-South African final where he came up against Izak van der Merwe. There had to be a loser and after a frustrating rain and darkness delayed match, De Voest was on the losing side of a 6-7 (4) 7-5 6-3 scoreline.

Describing his final to Road to London 2012, De Voest said: Izak had been playing well all week, and started well too, especially serving. I did not have a break point and we both held serve comfortably to the tie-breaker, which I again won with some great play rushing out to a 5-0 lead in the tiebreaker. In the second set Izak had more chances, but I held my nerve until 5-6, when he broke serve with a good game from him. The weather started to turn bad and at 2-3, on serve, the rain came and we stopped play at about 3.15.”

Then came some tricky choices to be made by the two finalists. Said De Voest: “The rain eventually stopped about 4.15pm, but it was getting dark quickly and not looking good to finish the final. The rules state that if the final is washed out or cancelled, both players receive finalist points and money and there is no winner. We inspected the court at 5.15pm, it was still damp and the light was getting worse.

“If we did not finish the match, both Izak and I would walk away as runner-up in terms of points and money, so we discussed our options and decided that even though the conditions were not fit to play according to the officials, we would go ahead and play, because at least then the tournament would have a champion and one of us would get the winners’ points and money.

“Izak came out and broke serve first game, playing attacking tennis, which I could not counter due to the conditions. I then struggled to see his serve and he served out the match to win the final set 6-3.”

Summing up though and De Voest was gracious in defeat. “It was a tough way to end a good week, but at least there was an SA champion and I was happy with my week’s performance in reaching the finals and the way in which I was playing.”

De Voest now has a week off from the court and then heads to the United States where he’ll play two Challenger events (both on clay) and then heads across to Europe to get ready for the French Open qualifying rounds. 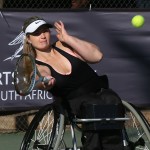 Seeds sweep into the next round at Soweto Open

Tokyo looms, again, We don’t know for sure in what shape of form the Olympics and Paralympics will take place in July to September and if anything 2020 taught us to take nothing for granted. What we do know is that if Tokyo 2020 +1 does go ahead, it will do so against a new-found back drop where simply taking… END_OF_DOCUMENT_TOKEN_TO_BE_REPLACED