In the next instalment of our series looking back at Rio 2016, we relive the day exactly four years ago when Hilton Langenhoven won Team SA’s second gold medal at the Paralympic Games.

Langenhoven had been disqualified from the T12 400m semi-final for stepping outside of his lane but a leap of faith had him go all the way.

He launched himself to a distance of 7.07m with his second attempt and even had the luxury of being able to take his final jump, safe in the knowledge that he had long jump gold in his clutches.

Two centimetres separated silver and gold as Kamil Aliyev of Azerbaijan had a best of 7.05 on the night.

Now a veteran of four Paralympics, Langenhoven has had an up-and-down past two years. Even at last year’s African Games in Brazzaville, Congo, he was beaten by great mate and fellow Paralympian Jonathan Ntutu in the 200m.

But there was always a plan and shortly after the race as he received physiotherapy, he said that it was all part of a process.

That process worked to perfection and his gold now gives Team SA their second gold and second medal of the 2016 Paralympics.

‘We need to fight to get into this team,’ said Langenhoven. ‘There are only so many slots and once you are here you do your country proud, your team and your family.

‘I cried myself to sleep after the 400m disappointment but I knew I had to pull it together … it’s just so amazing to stand on top of the world again … it was so close.

‘In 2012 there was no long jump, so athletes focused on other events but now it’s back.

‘I knew one big jump would be able to do it but remember there’s only one medal winner. If I knew on Thursday evening that the Lord would give me a medal in the long jump I would have been happy.

‘The 400m was my main event and I had put everything into it but I’m just so proud now to do this  for everyone! ‘

Said coach Raymond Julius: ‘Hilton was emotionally down after his 400m disqualification and it took quite a lot to pick him up again. When I saw him this morning he was very positive and managed to bounce back to win gold in the long jump.

‘We are very satisfied at this stage and are looking forward to the 200m. Like I said … sometimes good things fall apart so that better things fall together.’ 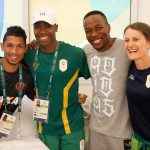 Rio Relived: Behind the scenes with the physios 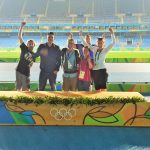 Rio Relived: After the lights went out 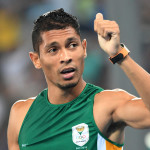