New Delhi ÔÇô Roland Schoeman described the Commonwealth Games as second only to the Olympics and did not rule out competing in a fifth Games in Glasgow in 2014.

Schoeman, the most experienced of the South African swimming contingent, told the international media he was confident the squad’s swimmers would make good on the medal expectation but also emphasized the fine line between success and perceived failure.

‘My preparation has been good. I am in a great head space and thrilled to be in Delhi. I had a few air conditioning problems but that’s been sorted and there are no complaints about the facilities, the Village and the food,’ said Schoeman. ‘It is always an honour to represent South Africa and what makes the Commonwealth so special is that it is a multi-coded event, where you get to interact with sports people from different codes and different countries. It is very different to our swimming World Championship and in my view the only experience that beats competing at the Commonwealth is the Olympics.’

Schoeman, a triple Olympian, an Olympic gold medalist, a former world record holder, former world champion and Commonwealth gold medalist in the 50 metres butterfly, said being based in the south of France for the last three months had been an inspired career move.

‘I went to Marseilles because my new coach is based there and I have thoroughly enjoyed the experience. Culturally I have enjoyed it, but the facilities are good and it is an ideal base in terms of the 2012 London Olympics,’ said Schoeman. ‘As I said earlier I am in a good space but that doesn’t guarantee any swimmer a medal and you still have to perform in the pool. The margins between 1st and eighth are so small and I always try and accentuate that point in interviews. You place outside of the medals and people immediately ask what went wrong, and assume everything went right if you are in the medals. No medal comes easy at the Commonwealth and there are quality swimmers and medal contenders from several countries. The Australians obviously have high hopes but the Canadians are a danger. But watch the South Africans. We’ve got some very good swimmers here.’

Schoeman said it was important South Africa’s swimmers continued to excel at the major events, as the next generation needed inspirational stories, as did the sport itself to attract long-term sponsors who were committed to the sport.

‘Sponsorship is crucial to the well-being of any swimmer and that is still an area that has to evolve in South Africa. The only way to ensure interest is there is to consistently produce in the pool and I’d like to think our swimmers, individually and as a group, have done that and there is enough talent to know that we will continue to make South Africa proud.’

Schoeman will defend the 50 metres butterfly title won in Melbourne in 2006 and he will be a medal contender in three other events.

‘I am motivated and have been asked if this is my last Commonwealth. I don’t know. Dana Torres is 41 and still competing in Olympic and World Championships so age isn’t the consideration. It is more desire, form and the motivation to want to compete, and at this stage I’d want to go to Glasgow in 2014 if I can contribute to a medal tally and if I am still enjoying being in the pool.’ 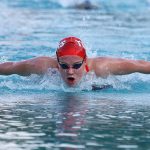 Coetzee to go to the US after Tokyo

Roland on a roll in Tokyo

By GARY LEMKE in Tokyo On the third day of staying in the Paralympic village bubble “it” finally dawned on me. “It” wasn’t the sheer visual aspect of the 4 000-plus Paralympians with disabilities all in the same environment of towering 17-storey apartments and surrounded by a 4km perimeter fence. Admittedly, that is the initial and most common conclusion of… END_OF_DOCUMENT_TOKEN_TO_BE_REPLACED