Making their way around Europe on a wing and a prayer, our national rowing team continue to impress with their efforts, writes Mark Etheridge.

Despite an almost total lack of funding after bringing great prestige to South Africa with an Olympic gold medal in London last year, national coach Roger Barrow saw two of his boats making the final in their respective events at the Royal Henley Regatta in England at the weekend.

Boats going all the way to the finals were the men’s lightweight fours and the men’s pairs.

It was the lightweight fours that pulled their way into rowing folklore with an unexpected gold medal in London last year but it wasn’t the same combination on this occasion with Mike Voerman replacing Matthew Brittain alongside James Thompson, John Smith and Lawrence Ndlovu.

“I was very happy about the two boats making finals. Our lightweight four took on the British heavyweight four and really gave them a good go,” Barrow told Road to Rio 2016 this week. “It was more a case of us giving it away with poor steering meaning we hit the booms, that’s river racing but it was still a good build-up for Lucerne [Switzerland] this weekend.”

Flying the SA flag in the pairs were Shaun Keeling and Lawrence Brittain and David Hunt and Vince Breet.

On the women’s side Ursula Grober made her debut for South Africa and she raced against Olympic champion Emma Twigg of New Zealand in the scull event. ” She’s also heavyweight, so out of Ursula’s category but she nonetheless pusher her all the way to the line,” said Barrow. “This weekend Ursula will be in her own category of lightweight.”

The women’s pair of Lee-Ann Persse and Naydene Smith, who were also part of Team South Africa at the Olympics in London, joined up with the rest of the SA team on Monday.

On this weekend’s Lucerne line-up, Barrow said: We hope to get all the five boats into the A Final and then see from there. The one men’s pair is an Under-23 pair and they’ll go to Austria next week to race the Under-23 World Championships. This is a big regatta for them, being so young,” concluded Barrow. 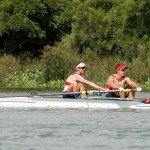 Title No13 for Ramon

Tokyo looms, again, We don’t know for sure in what shape of form the Olympics and Paralympics will take place in July to September and if anything 2020 taught us to take nothing for granted. What we do know is that if Tokyo 2020 +1 does go ahead, it will do so against a new-found back drop where simply taking… END_OF_DOCUMENT_TOKEN_TO_BE_REPLACED