South Africa earned three medals at the IAU 100km World Championships on Saturday, with both the men’s and women’s teams securing podium places at the biennial showpiece in Sveti, Croatia.

Spearheading the SA men was three-time Comrades Marathon winner Bongumusa Mthembu, who led the onslaught, bagging an individual bronze medal. Mthembu, who led the race with a little over 10km remaining, held on in the latter stages to complete the event in 6hr 33min 47sec.

Hideaki Yamauchi and Takehiko Gyoba of Japan bagged the gold and silver medals in 6:28:05 and 6:32:51 respectively.

After pacing herself well in the women’s race, Salome Cooper spearheaded the charge for the South Africans, crossing the line in seventh position in 7hr 51min 13sec.

Though she was well behind Nikolina Sustic, who won the title for the host nation in 7:20:34, Cooper carried the SA team to another silver medal, with Fikile Mbuthuma taking 14th place and Lisa Collett finishing 19th.

Germany’s Nele Alder-Baerens came in second place in 7:22:41 minutes after Sustic and was followed by Japan’s Mai Fujisawa in third place.

‘That’s excellent for our team of men and women to finish second in the team contest,’ said James Moloi, acting president of ASA. ‘Mthembu deserves the biggest applause for getting on the podium for the second time as an individual by winning the bronze medal.

‘We congratulate both our teams for hard work and honouring the mandate we gave them to go there and fly the flag of Republic of SA at the championships. Thank you to the coaches and management for the excellent work and discipline displayed by the team,’ Moloi concluded. 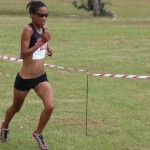 Track ace Olivier will be up and running soon

Tokyo looms, again, We don’t know for sure in what shape of form the Olympics and Paralympics will take place in July to September and if anything 2020 taught us to take nothing for granted. What we do know is that if Tokyo 2020 +1 does go ahead, it will do so against a new-found back drop where simply taking… END_OF_DOCUMENT_TOKEN_TO_BE_REPLACED