Four South African athletes took away second spots from the Janusz Sidlo Memorial track and field meeting in Sopot, Poland, writes Mark Etheridge.
Sprinter Akani Simbine, 110m hurdler Antonio Alkana, one-lap hurdler Hamman le Roux and javelin thrower Rocco Bosman all ended on the podium.
Simbine ran 10.23 to end runner-up behind veteran Kim Collins of St Kitts and Nevis (10.20).
Then in the hurdles it was Alkana who clocked 13.58 as Artur Noga pipped him by just 0.01sec. Still, Alkana will be happy with his consistent form after his 13.47 last week saw him qualifying for world championships in China later this year.
Le Roux ran 50.42 in the 400m hurdles and again it was a close-run thing as he was edged out by 0.02sec by Patryk Dobek. In the same event Ruan de Vries ran 14.18 in the heats.
Final second place went to Rocco Bosman in the javelin. His 76.68m is still a long way off the 85.39 he threw in Cape Town a few weeks back but he had the consolation of second spot behind Hubert Chmielak (80.42).
‘It’s a bit frustrating because I’m missing something in my technique that normally makes it easy to throw 80m.’ Bosman told Road to Rio 2016.
‘Yesterday it felt almost right but it didn’t turn out that way. But still, it feels like another step out of the dip. I’ve just got to hang in there. I’ve got one more competition in Budapest, Hungary next month before I come back home. So it will be great if I can get another 80m under the belt and go to World Championships with some confidence.
‘I just need to relax more and it’s much easier to do so in SA and I’m battling to relax here. I might need a few weeks away from javelin and just start from scratch again… lets see if I have time do do that though.’
Other SA athletes in action were Jerry Motsau and Dumisani Hlaselo who were sixth (3:39.10) and ninth (3:40.08) respectively in the 1500m. And in the 800 A race Rynhardt van Rensburg ran 1:46.82 for third spot as Morocco’s Nader Belhanbel won in 1:46.59.
Women’s action saw double national track champion Justine Palframan (pictured with Simbine and Collins above) take third spot in the 400m with a 52.84 as Nigeria’s Patience George won in 52.26.
‘Slowly getting better… my first 300m felt good, I battled a bit with the last 100m but at least I know what needs to be done before world students,’ Palframan told Road to Rio 2016 as she was travelling back to her Italian training base in Gemona.
‘It was a little chilly, but I can’t remember wind. It was a nice track, long straights, short bends.’
Palframan’s next challenge will be a 200m in Velenje, Slovenia later this week.
And in the 800m it was Anuschka Nice whose 2:05.01 saw her claim fourth in the second heat. 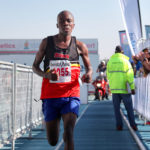 Double win for Mokoka as he targets world championships

Tokyo looms, again, We don’t know for sure in what shape of form the Olympics and Paralympics will take place in July to September and if anything 2020 taught us to take nothing for granted. What we do know is that if Tokyo 2020 +1 does go ahead, it will do so against a new-found back drop where simply taking… END_OF_DOCUMENT_TOKEN_TO_BE_REPLACED