The South African Open Athletics Championships that will take place at Potchefstroom this weekend (8-9 May) will be the last major local meeting of the season. Many of the Tuks/hpc athletes have good reason to feel that it has been a case of mission accomplished for them.
Of the 11 track and field athletes sponsored by the High Performance Centre (hpc) six have already qualified for the World Championships in Beijing (22-30 August) and two have qualified for the World Student Games in Gwangju, South Korea (3-14 July).
While a scorecard of 8/11 is certainly not bad it still could improve. It’s a foregone conclusion that Commonwealth and African 400-metre hurdles champion, Cornel Fredericks, will qualify for Beijing once he has recovered from his Achilles heel problems. If everything goes according to plan he should start competing in Europe within the next few weeks.
A recurring injury has prevented Thando Roto, a former South African junior champion in the 100 metres, from trying to qualify for the World Student Games.
The Tuks/hpc athletes are currently ranked quite high on the IAAF-rankings, but it should be remembered that the international athletics season will only begin in earnest this weekend.  During the next few weeks major changes can be expected.
At the moment Akani Simbine (SA champion) is ranked ninth in the 100m, with a time of 10.09sec, and eighth in the 200m, with a time of 20.27. The fastest sprinter over 100m is currently Keston Bledman (Trinidad-Tobago) with a time of 10.01. In the 200 metres it is Carvin Nkanata (Kenya) with a time of 20.14.
Simbine starts his international campaign in Hengelo on 24 May. He will then get a chance to take on Usain Bolt on 13 June at the Diamond League Meeting in New York. He has also been invited to compete in Hengelo (24 May).
Wenda Nel (SA champion and pictured above) is currently ranked as the world’s second best 400m hurdles athlete with a time of 55.27. Kendra Harrison (USA) has set a time of 54.94. Nel plans to run the 400 hurdles as well as the 400m at the SA Open in Potchefstroom this weekend. She has been invited to compete at the World Challenge and her first international race will be in Beijing on 20 May.
LJ van Zyl (SA champion) is currently the 8th fastest male athlete in the 400-hurdles.  Michael Stigler (USA) is the fastest with a time of 48.44s. Van Zyl’s international campaign will begin on Saturday when he will run the 200-hurdles at the CityGames in Manchester.  On Wednesday (15 May) he will compete at the Diamond League Meeting in Doha.
South African shot put champion, Orazio Cremona, is ranked 14th with a best performance of 20.49m. Joe Kovacs (USA) is the world leader with a distance of 22.35. The Tuks/hpc athlete’s first international competition will be in Hengelo on 24 May and he’ll also take part in New York.
Lebogang Shange (SA Champion) is ranked 37th in the race walk with a record time of 1:21:50.  The time difference between Aleksandr Ivanov (Russia) who is ranked 13th and Shange is only 1min 44sec. On Saturday Shange will compete in the 25km Jackie Meckler Race Walk as part of his training. He has won the event three times. His next international race will be the IAAF Race Walk Challenge in La Coruna Spain (6 June). Shange also hopes to compete in Britain on 20 June.
Marc Mundell is ranked 34th (3:56:47) in the 50km with Matej Toth (Slovak Republic) currently the fastest with a time of 3:34:38.
Fredriech Pretorius (SA champion) has qualified for the World Student Games in the decathlon. Duwayne Boer (SA Students Champion) has qualified in the long jump. Both of them will compete at the SA Open. Pretorius will be in action in the pole vault, long jump and 110 hurdles. 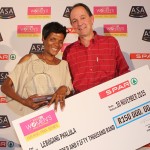 Conrad on her Commonwealth marathon campaign

Tokyo looms, again, We don’t know for sure in what shape of form the Olympics and Paralympics will take place in July to September and if anything 2020 taught us to take nothing for granted. What we do know is that if Tokyo 2020 +1 does go ahead, it will do so against a new-found back drop where simply taking… END_OF_DOCUMENT_TOKEN_TO_BE_REPLACED