The Mercedes-Benz SA Surfing Championships was once again moved to Nahoon Corner, East London, on day five as the current made surfing at Nahoon Reef impossible in Buffalo City on Saturday.

Conditions at the Corner were good, but with slightly smaller and fewer quality waves on offer, compared to perfect conditions the day before.

Finalists were confirmed for all divisions in the competition except for the Open Men and Women, who will start day six off with their semi-finals.

The swell had certainly dropped overnight and thus the waves were slightly smaller, but as can be seen from the scoring, if surfers found the right waves the scores were available.

The first final of the day to be confirmed was the Women’s O/30, with Michelle Van Kempen (Nelson Mandela Bay) and Tasha Mentasti (Eden) joining yesterday’s two confirmed surfers Heather Clark (Ugu) and defending champion Lynne Mackey in the final.

The men’s O/35 final promises to be an intensely contested affair tomorrow, with defending champion Llewellyn Whittaker (Eden) and Tyrell Johnson (Buffalo City) both having won all their heats so far, and scoring 15 and 15.1 in their semi-finals respectively. They are joined in the final by Orrin Johnson (Buffalo City) and Etienne Potgieter (Nelson Mandela Bay).

Another man to win all of his heats so far, is Wayne Monk (Buffalo City) in the O/45’s division, where he is looking to add the title to the O/40 title he won in 2016. He will be hard-pushed, as he competes against 3 former national champions in Carl Roux (Ugu), who is also the defending champion, Gareth Sepp (Buffalo City) and Rob Moore Boyle (eThekweni).

The Men’s O/55 managed to throw up the highest heat score of the day with, four-time national champion and current world vets champion, Chris Knutsen’s (eThekweni) 17.5 showing he still is at the top of his game. Nelson Mandela Bay has two representatives in the final with Andre Venter and Trevor Hansen, the final spot going to Bruce Anderson (Cape Town).

The Over 50’s division has surfers from four different regions battling it out for the title. Andre Mory (Cape Town), Richard Heath (Cape Winelands), David Malherbe (Buffalo City) and Daryl Adamson will all be looking to make the title theirs on Sunday.

The final heats of the day were the Men’s O/40 semi-finals. Greg Emslie (Buffalo City), who is has surfed on each day of the championships since he is also defending his Open division title, once again showed why he is considered the favourite for the title, with two 8.5 wave scores.

Incredibly, his heat average throughout the competition currently sits above 16pts.

He was pushed all the way in semi-final 1 by Tristan Johnson (Buffalo City), whose 15pts also secured a final spot. The last heat of the day proved to be far lower-scoring, yet equally competitive with 1.1 separating 1st and 3rd, but in the end it was Warwick Heny (Nelson Mandela Bay) and Justin Maisch (Ugu) who booked the final two spots.

The swell was expected to drop even further on Sunday with far less energy in the water, meaning fans can expect a return to Nahoon Reef for the final day with some great waves on offer. 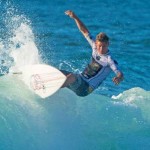 SA duo advance to Round 3 Down Under 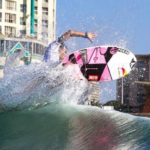 Brazil come to the party at SA Open of Surfing 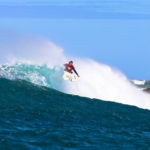 SA’s best take to the water for championships action

Tokyo looms, again, We don’t know for sure in what shape of form the Olympics and Paralympics will take place in July to September and if anything 2020 taught us to take nothing for granted. What we do know is that if Tokyo 2020 +1 does go ahead, it will do so against a new-found back drop where simply taking… END_OF_DOCUMENT_TOKEN_TO_BE_REPLACED