South African juniors Danielle du Toit and Deon Germishuys wrapped up their Duke of York Young Champions Trophy campaign in a tie for 25th at Royal Birkdale this week.
On another glorious day on the Lancashire Coast, reigning Nomads SA Girls champion Du Toit from Gauteng North signed off with a birdie-birdie finish for a 78.
Germishuys from Western Province – the winner of the 2016 Nomads SA Boys U-19 Stroke Play Championship – returned a 75 in the final round and finished alongside Du Toit and Peyton Callens from Canada on 14 over 230.
Fellow Canadian Chloe Currie fired five birdies for a four-under-par 68 to clinch a one stroke victory in the prestigious event on a winning score of two-under-par 214.
‘The players had the most unbelievable weather for their final round with warm weather and just a slight breeze to cool things down,’ said Womens Golf South Africa Vice-President Sally Greasley.
‘Deon started with a wayward drive and dropped a shot at the first hole, but rallied with easy pars at the next two holes and boxed a birdie putt at the fourth after a great shot into the green. He notched another birdie at six, but dropped a shot at nine despite a great bunker shot and turned one under.
‘After a steady start, his approach shot at 13 hit a sprinkler head and bounced into deep rough.  He followed that with another drop after a sloppy putt at 14, but he birdied the tough 15 that features no less than 15 bunkers. After pars at 16 and 17, he was unfortunate to miss his par putt at 18 to finish with a bogey.
‘Danielle had a bunker day and, although she executed some fantastic trap shots, they cost her dearly. She started with a great up and down from the bunker on the first, followed by a birdie at two and she parred the next two holes.
‘Her approach shot at the fifth just rolled into a greenside bunker and finished very close to the lip and she had an impossible stance. The shot flew across the green into deep rough, but she chipped out and the ball rolled into the other bunker. Luckily she boxed the putt to limit the damage to a bogey.
‘She dropped two more shots at seven and nine and lost a ball in the rough on 11. After bogeys at 13 and 16, she showed great resilience to finish with back-to-back birdies.
‘Both players handled themselves very well on what is a very challenging course with 123 bunkers and very tough rough. They have made several new friends and will no doubt be exchanging news on FB when they get home.
‘South Africa seems to be a favourite destination for several members of Royal Birkdale. There was much interest in their progress and they were both complimented on how they handled some of the difficult lies they faced. They certainly represented their country proudly. This is such a fantastic tournament for the young up-and-coming juniors and one both Danielle and Deon hope to qualify for again next year.’ 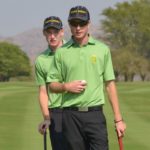 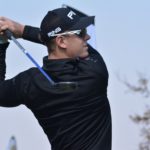 Lanky Du Preez back with a bang at Waterkloof 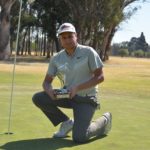