The seven medals brought SA’s medal tally to 22 in total, and put them second on the table behind Egypt (24).

On Wednesday it was Lara van Niekerk who came out on top with a new Championships record time of 31.99 seconds in the 50m breaststroke, clipping just under a second from the 32.58 record held by Kaylene Corbett.

Jade Simons won SA’s second medal in the race, a bronze, finishing in 33.10, while the silver went to Zambia’s Tilka Paljk in 32.15.

Jessica Whelan bagged yet another silver medal, this time in the 400m freestyle, clocking 4:23.76, while Egypt’s Hania Moro swam away with the gold in 4:21.76 and Algeria’s Cherouati Nafissa with the bronze in 4:24.42.

Kiely was also a part of the 4x100m freestyle relay team that won the gold in 3:52.63 with the help of team mates Erin Gallagher, Janie Coetzer and Lesley Blignaut.

Ayrton Sweeney, Alaric Basson, Ruan Breytenbach and Alard Basson finished off the evening with a bronze medal in the 4x200m freestyle relay, clocking 7:38.19 behind Egypt in 7:28.10 and Tunisia in 7:31.55. 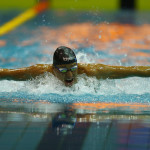 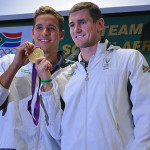 Three wins each in France for Cameron and Chad

By GARY LEMKE in Tokyo On the third day of staying in the Paralympic village bubble “it” finally dawned on me. “It” wasn’t the sheer visual aspect of the 4 000-plus Paralympians with disabilities all in the same environment of towering 17-storey apartments and surrounded by a 4km perimeter fence. Admittedly, that is the initial and most common conclusion of… END_OF_DOCUMENT_TOKEN_TO_BE_REPLACED