The South African men’s hockey team lost their third straight match against France at Wits Hockey Astro, going down 3-1 in a Test that saw two goals in the opening three minutes.

France struck first through a beautiful deflected goal by Timothee Clement before Nic Spooner levelled after a trademark Julian Hykes intervention. If the decent crowd at Wits expected more goalmouth action to follow, they were a bit disappointed as the remainder of the first quarter saw no further goals. South Africa were forced to defend in the opening chukka where a combination of poor French finishing and great rear-guard defence stopped the French from scoring. Their usually lethal penalty corners failed them to as they were unsuccessful for three in a row.

South Africa finally clicked into the game in the second quarter a looked to take advantage of their numerical advantage when Cristoforo Peters-Deutz was yellow-carded. They created two penalty corners but one from Austin Smith and one from Jethro Eustice were saved well. Although it was a far better half for South Africa, there were certain combinations that were just not quite clicking, keeping the French very interested.

And they were beyond interested in the third quarter when South African hesitation created space in the D and first Maximillien Branicki and then Gaspard Baumgarten punished the space, giving the French a 3-1 lead. That double punch winded the South Africans and in truth, they were hanging on for the remainder of the third quarter.

But whatever was said galvanised the team and after withdrawing the keeper and playing Rhett Halkett as a kicking back, South Africa played with a much better intensity and created numerous circle entries with the closest chance being struck against the post by Taine Paton. Tyson Dlungwana, Dayaan Cassiem, Keenan Horne and Bili Ntuli all fancied good chances but were denied by good defending by the European side.

For the South Africans, it was a match that showed more growth as they spend time together, but the questions will continue to be asked while the side failed to convert on the number of opportunities. What was evident, though, is that the new-found freedom is clear, and the South African men are going to cause a lot of upsets when they get their combinations to click.

After the game, his 94th, French wing Viktor Lockwood was gracious in victory: ‘It’s great to be in South Africa because the people are amazing, and the country is beautiful. The delay to the game was tough as we had to go through warm-ups again. South Africa gave us a great game and we were able to take our chances better than them for the win. We are happy as its more good progress towards our World Cup journey.’

South African captain Keenan Horne shared: ‘It’s only our third Test together as this squad and in the new era of South African hockey, but we are really enjoying playing together and getting the culture right in the team. We may not be the biggest country in the hockey world, but South Africa has a superb sporting history and we want to be part of writing more of that history. One country, one team.’

The two teams play the final Test on Sunday. 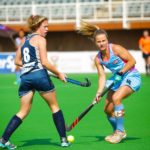 Weakened SA hockey side go down to Pakistan

Tokyo looms, again, We don’t know for sure in what shape of form the Olympics and Paralympics will take place in July to September and if anything 2020 taught us to take nothing for granted. What we do know is that if Tokyo 2020 +1 does go ahead, it will do so against a new-found back drop where simply taking… END_OF_DOCUMENT_TOKEN_TO_BE_REPLACED