The South African team for the ICF Canoe Marathon World Championships in Prado Vila Verde, Portugal from 6-9 September has been confirmed.

This follows the national marathon championships in St Francis Bay which took on a new, exciting form as paddlers had to deal with tides, flowing water and weather throughout the weekend’s action.

Ultimately the intense action led to a very strong team being assembled for the global showpiece.

The obvious omission was Hank McGregor, who has retired from the K1 men’s race, which means Jasper Mocké, who finished second behind winner Andy Birkett on Saturday, will join 2017 world championship silver medallist Birkett as the men’s K1 representatives.

The women’s K1 paddlers are Bridgitte Hartley and Jenna Ward. The pair fought it out tooth and nail for the national title with Hartley sneaking home in the end. With Ward’s impressive age-group credentials, she will hope to emulate Saturday’s feat in St Francis at senior level.

Last year’s U23 world champion silver medallist Nick Notten leads the charge again in the age-group medal bid and he will be joined in the men’s U23 race by Louis Hattingh, who is a K2 medallist and looking to add a K1 medal to his collection.

Sabina Lawrie and Christie Mackenzie will be the two paddlers entrusted with flying the South African flag in the women’s U23 K1 race. Lawrie beat Mackenzie at the national championships recently and both are newbies in the U23 age ranks so Portugal will provide a strong learning platform.

Mackenzie has already tasted success on the international stage after she won bronze in the junior girls K1 race in Pietermaritzburg last year.

In the junior K1 ranks, Capetonian Uli Hart and Maritzburg schoolboy David Evans will lead the junior boys’ charge while Caitlin Mackenzie and Amy Peckett will be the two K1 entrants in the junior girls’ showdown.

The doubles craft will see the exciting combination of Birkett and marathon legend McGregor lead the men’s K2 challenge where they will be joined on the start line by Stuart Maclaren and Kenny Rice.

The women’s K2 combinations are Hartley and Melissa van Rooyen and the pairing of Hayley Nixon and Christie Mackenzie. Three of the four paddlers were on duty in the K2 event in Pietermaritzburg last year with Van Rooyen the only new addition.

Mackenzie teamed up with Hartley last year while Nixon paired with Michelle Burn, so there has been a shake-up in the combinations.

There is no U23 K2 category so the focus then shifts to the juniors with 2017 U18 K2 silver medallists Hamish Mackenzie and Evans looking to emulate or better their performance last year.

Hart and Matthew Fenn will be the other junior boys K2 on the water.

In the junior girls division, Caitlin Mackenzie and Zara Wood will pair up for the international showpiece while Mackenzie’s 2017 partner Peckett will team up with Cayleigh Shaw for the doubles dice. 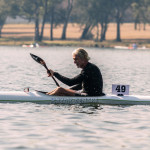 Six of the best for SA paddlers in Oklahoma City

By GARY LEMKE in Tokyo On the third day of staying in the Paralympic village bubble “it” finally dawned on me. “It” wasn’t the sheer visual aspect of the 4 000-plus Paralympians with disabilities all in the same environment of towering 17-storey apartments and surrounded by a 4km perimeter fence. Admittedly, that is the initial and most common conclusion of… END_OF_DOCUMENT_TOKEN_TO_BE_REPLACED