South Africa’s six Paralympic cyclists are feeling confident ahead of the London Paralympic Games, reinforced by their commitment to serious fine-tuning of their preparations.

With the UCI Para-cycling 2012 competition season now complete, the cyclists have continued their training for the Paralympic Games with a dual focus on developing their fitness to peak for London and on technical aspects demanded of the events in which they will compete.

The track cycling pair of Roxy Burns and Jaco Nel have just returned from Mallorca, Spain having completed the second of their two training camps. The training venue provided them with an excellent wooden track on which to ride and, importantly, good summer weather. Both riders have been feeling the brunt of the wet winter weather of the Western Cape these past few months.

ÔÇ£The events in which Roxy and Jaco will compete combine several disability classes, with factors applied to each class in order to level the playing fields. There is no doubt that both riders can achieve podium results, although the ‘factor’ factor does complicate things,ÔÇØ says Dr. Mike Burns, Cycling SA Director of Para-cycling and Paralympic cycling team manager.

Hand cyclists Ernst van Dyk and Stuart McCreadie depart on 18 August for Switzerland to take advantage of the beautiful European summer weather and quiet Swiss environment for their final ten days of training. They will join their Para-cycling teammates the day before the London Paralympics opening ceremony on 28 August. ÔÇ£The road team trained and raced in Switzerland about two months ago,ÔÇØ continued Dr. Burns, ÔÇ£And the environment lends itself extremely well to what the hand cyclists need in terms of preparation going into the Paralympic Games.ÔÇØ

For tri-cyclists Madre Carinus and Gerhard Viljoen, a hard block of training has been coupled with a particular focus on their tricycle equipment. ÔÇ£Madre has shed a kilogram or two off the weight of her tricycle by fitting a carbon fork and deep section carbon wheels, whilst Gerhard has been testing a Q-ring front blade to optimise his power output,ÔÇØ says Dr. Burns.

The hopes are high that 2011 world champion hand cyclist in the road race Van Dyk will return to South Africa with a potential two medals. It is anticipated that a further two medals could be achieved between the remaining athletes.

The London 2012 Paralympics opening ceremony is on 29 August and the Games finish on 9 September. The para-cycling events kick off on 30 August. 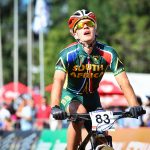 Reid leads the way for SA riders at World Championships

By GARY LEMKE in Tokyo On the third day of staying in the Paralympic village bubble “it” finally dawned on me. “It” wasn’t the sheer visual aspect of the 4 000-plus Paralympians with disabilities all in the same environment of towering 17-storey apartments and surrounded by a 4km perimeter fence. Admittedly, that is the initial and most common conclusion of… END_OF_DOCUMENT_TOKEN_TO_BE_REPLACED