South Africa’s three top para-triathletes were in action under the hot Spanish sun at the ITU Altafulla Cup para-triathlon as they chased global ranking points.

Hot and dry temperatures were the order of the day.

Kicking off at 8.30am, the swim was tough, and most athletes felt it seemed a bit longer than the scheduled 750-metres. Things weren’t made any easier by the strong sea current.

Stan Andrews was first off in the PTS4 category and had a good swim, exiting the water in fourth place with an Italian right on his tail.

Next off were PTVI athlete David Jones and guide Rohan Kennedy. Also having improved their swim times this year, they exited in the front half of their field.

Out on to the bike course, which was a 19km ‘out and back’ with a few technical sections, it was to be a fast day for both Andrews and Jones. Conditions were near perfect, with the wind staying away long enough.

At this stage, PTWC category athlete Anton Swanepoel was already well into his swim against a fairly strong field. Swanepoel, now having been classified into H2, faced a staggered start, three minutes later than his rivals in H1.

A tough day for Swanepoel saw the heat having a key role to play on the hand cycle.

Jones maintained position throughout the cycle, beginning the run comfortably in sixth position and looking to move up a slot or two.

Andrews meanwhile, had fallen prey to Japanese competitor Uda Haicheki and dropped to fifth by the beginning of the run.

‘I wasn’t going to lose another position on the run so I paced myself well,’ said Andrews. ‘The Italian had caught me again, but I could hear that he was struggling behind me. I kept my pace and planned to sprint the last 400m, which is exactly what happened.’

Andrews, elated with his 5th place, secured the points required to move back to eighth position on the global ranking.

Jones/Kennedy also had a good run, managing to hold position and also claim much-needed points towards the World Championships in September.

Swanepoel pushed hard, although the heat and the new delayed start proved to be a tough mix. Finishing a commendable eighth in his category, saw him at least retain his global ranking.

Now the South Africans move on to Italy and the ITU Iseo-Franciacorta Cup para-triathlon event on Saturday. 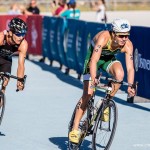 Sullwald starts from the bottom at African Champs up north

By GARY LEMKE in Tokyo On the third day of staying in the Paralympic village bubble “it” finally dawned on me. “It” wasn’t the sheer visual aspect of the 4 000-plus Paralympians with disabilities all in the same environment of towering 17-storey apartments and surrounded by a 4km perimeter fence. Admittedly, that is the initial and most common conclusion of… END_OF_DOCUMENT_TOKEN_TO_BE_REPLACED