On the hunt for qualifying times for this year’s Paralympics in London, the para-athletics squad had a fine day at the office, setting two world records, two African records and a South African record.

And it was Stellenbosch’s Fanie van der Merwe who stole the show with a world record time off 11.52 in the 100-metre sprint, on his birthday.

The other world record came in the 4x100m ┬árelay as Samkelo Radebe, Zivan Smith, Arnu Fourie and Oscar “Blade Runner” Pistorius (in that order), beating the old (T42-46 category) world mark of 42.50sec by 0.25sec. The previous mark had belonged to the United States team.

Fourie was also in the thick of things, setting an African record of 11.09sec in the 100m dash (T44 class). This was also a personal best for the Stelllenbosch based athlete.

Training squad partner Isle Hayes then set an African record of 5.81 in the long jump, this into a win of 0.5m per second.

Then Dyan Buis, who set a world best in the long jump last weekend, only to see it not being ratified as there was no doping control, clocked a personl best of 11.29 in the 100m dash.

A total of 12 A-standard Paralympic qualification marks were achieved during the meeting. 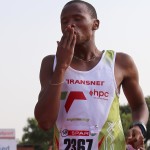 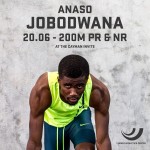 Jobodwana the highlight of a great weekend for SA athletics 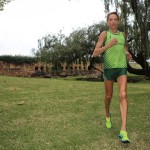 Just one marathon for Comrades runner-up in Oceans build-up

Tokyo looms, again, We don’t know for sure in what shape of form the Olympics and Paralympics will take place in July to September and if anything 2020 taught us to take nothing for granted. What we do know is that if Tokyo 2020 +1 does go ahead, it will do so against a new-found back drop where simply taking… END_OF_DOCUMENT_TOKEN_TO_BE_REPLACED