The Cape Town duo of Sinali Sango and Gian-Quen Isaacs will feature on the Junior Grand Prix circuits for the first time when they compete in Kaunas, Lithuania.

Featuring some of the world’s up and coming skaters it provides youngsters between the ages of 13 and 19 the opportunity to compete at international level.

The Kaunus competition is the third of the seven events. The ISU Junior Grand Prix of Figure Skating ‘Amber Cup’ has Sango and Isaacs, accompanied by coach Megan Allely, representing South Africa at this prestigious event.

Both athletes have worked really hard to prepare for the event with Sango training in Italy and Isaacs in Canada during the July school holidays.

Isaacs is the current SA champion in the novice section. A Grade 8 pupil at Holy Cross High School, she’s done really well in two of her international appearances, placing 13th in the Golden Bear Competition in Croatia (November, two years ago) and winning the gold medal at the Santa Claus Cup in Hungary (December, last year). She’s won many awards and is ranked first in her section this year.

‘I’ve worked really hard to get this far and being selected to represent SA is both overwhelming and exciting,’ she told Team SA.

As for Sango, he’s a national silver medallist in the junior section and has represented SA in seven international events.

Currently in Grade 9, he took third at the Rooster Cup in France two years ago and second in Slovakia late last year. He has earned his SAFSA National Colours, in recognition of his achievement at international ISU events.

‘I’m looking forward to skating in Kaunas, the City of Amber. This is my first Grand Prix season and I want to do well,’ said Sango.

Added coach Allely: ”Both kids have prepared well for this event and their goal is to get the required technical score in both their short and long programmess to qualify for Junior Worlds in March next year.’

The fifth of the seven events will be held in Ostrava, Czech Republic at the end of September 2018. South African figure skaters Marion Papka and Evan Wrench will be representing the country at this event. This is their second Junior Grand Prix season. 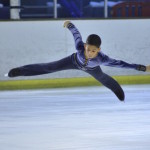 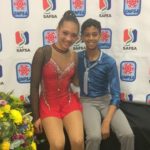 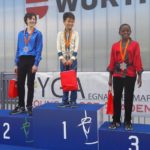 SA five burn up the rinks in Europe