A South African national team is in Los Angeles, United States to take part in the Special Olympic Summer World games.
The Games begin on Saturday and end on 2 August.
‘The Special Olympics Summer World Games will provide the platform for athletes with intellectual disabilities to rise above the typical stereotype of daily exclusion and humiliation. By using sports as a catalyst to create an opportunity for our athletes to be defined by their abilities rather than their disabilities. And we will celebrate their achievements together,’ said Special Olympics South Africa CEO, Igna Steyn.
The Special Olympics national team is made up of 90 individuals consisting of coaches and athletes and the athletes will be competing against teams from all over the world. They will be participating in 10 different sporting codes which include soccer, table tennis, futsal, bocce, swimming and horse riding.
The games will be held over a period of 9 days and 7000 athletes will be involved. This will be the largest event held in LA since the 1984 Olympics Games. SA’s Special Olympics athletes are people that have been marginalised for a very long time and through sport Special Olympics has given them the opportunity to shine and become respectable members of society.
The world summer games will be their platform to shine in the city lights.
The 2015 Special Olympics team  will be hoping to replicate the incredible success of the 2013 ational team that returned victorious from the World Winter Games in Pyeong Chang with a gold medal in floor hockey, and a gold and silver medal in figure skating.
The team were sent on their way last week with a function in Johannesburg, attended by chairperson Dr Mathews Phosa, heads of state as well as our ambassador, Bidvest Wits and Bafana Bafana soccer player Sibusiso Vilakazi.
The Special Olympics Summer World Games official partners: Coca-Cola, Deloitte,Mattel,Bank of America,Toyota, Kaiser Permanente. Broadcasting of all the games will be done by ESPN 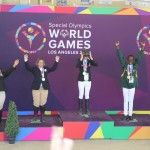 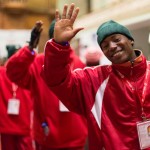