Our leading women’s javeliner has had a serious set back in her IAAF DIamond League race aspirations.

Sunette Viljoen has mixed it with the best this year, going head to head with world record-holder Barbora Spotakova on a regular basis and also throwing an African best.

She was hoping to continue the struggle in London this weekend, venue for the latest IAAF DIamond League track and field event.

But communication confusion means that she’ll be firmly grounded in South Africa this weekend.

“It’s just a big mess-up. I was supposed to throw in London but for some or other reason there was a breakdown between my agents and the meeting organiser. And now the organiser doesn’t want to know my story because he says the event is full,” said Viljoen on Thursday.

“I’m very disappointed, especially because I’m in the Diamond Race. So now my next meeting will be the final meeting in Zurich.”

Viljoen is currently placed third in the Diamond Race with seven points, behind Czech Republic’s Spotakova (12 points) and Kara Patterson of the US (seven).

Pistorius will be the busiest of the three, running two races in the space of two days. On Friday he runs the 400m B race and will continue to hunt down his first sub-46sec finish. Based in Italy during the European season, he’s certainly on track after a 46.02 at Celle Ligure last month. On Saturday he lines up for the same distance but in the T44 para-athletics category and that race should be a one-horse event.

Van Zyl, who turned 25 last month, lines up in good form after his season’s best 48.51sec at the African Championships.

How he’ll go though is not exactly certain as he hadn’t been planning to run this leg of the Diamond League. “I got a very unexpected and late call to say that┬á there’s a lane open for me because there was a cancellation,” said Van Zyl Friday. “So I’m just going to try and run a good place tonight.”

A place is going to be no mean feat though with 2010 world-leader Bershawn Jackson (47.32sec) and Olympic great Felix Sanchex in the mix as well,

Van der Westhuizen goes off in the mile on Saturday and is still trying to get fully back on track after stomach problems in Morocco a few weeks back. His personal best of 3:54.90 was logged in Norway two months ago and he’s aiming to build on that this time out. He goes into the race with a personal best 8:00.05 for 3000m last week, although he himself wasn’t too excited about his efforts.

As for this weekend, he left no doubts as to his aims: “I’m going for a personal best in the mile this time out. I really want to focus on competing well and placing myself in a good position. These meets are all great experience for me and are exactly what I need to get to the next level. So I’m hoping for the best.” 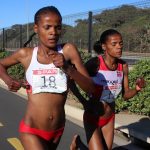 Phalula’s victory is a triumph over tribulations

Tokyo looms, again, We don’t know for sure in what shape of form the Olympics and Paralympics will take place in July to September and if anything 2020 taught us to take nothing for granted. What we do know is that if Tokyo 2020 +1 does go ahead, it will do so against a new-found back drop where simply taking… END_OF_DOCUMENT_TOKEN_TO_BE_REPLACED