Our touring women’s hockey side have gone down to China a third time in Beijing but continue their learning curve on the jam-packed tour.

The all-action tour features no less than 12 internationals against the Olympic silver medallists of China, as well as a whole heap of training workshops under the eye of newly appointed coach Giles Bonnet.

In the third international, won 7-2 by the hosts, there was at least the excitement of two milestones for the South Africans.

Captain Marsha Marescia equalled former player and captain Lindsey Wright (nee Carlisle) in reaching 200 Test caps. But that wasn’t all. Kathleen Taylor also had something to celebrate as she reached her 100th Test cap.

In preparation for the afternoon match, the strikers focused on goal scoring techniques and shooting skills during the morning training session. As a group the strikers are excited to try new things and become confident and creative in the attacking circle.

As far as the third match went, the South Africans managed to keep the score down to 2-2 for the first 20 minutes of the match. But despite working hard, they conceded another three goals before half-time.

In the second half they created more scoring opportunities but the Chinese still managed to pierce the SA defence on two more occasions.

Selectors name squad of 48 for training and Tests

SA go down to Argentina in second match 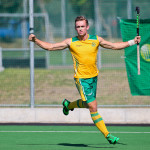 SA teams gear up for African Champs on home soil

By GARY LEMKE in Tokyo On the third day of staying in the Paralympic village bubble “it” finally dawned on me. “It” wasn’t the sheer visual aspect of the 4 000-plus Paralympians with disabilities all in the same environment of towering 17-storey apartments and surrounded by a 4km perimeter fence. Admittedly, that is the initial and most common conclusion of… END_OF_DOCUMENT_TOKEN_TO_BE_REPLACED