SASCOC have re-iterated that Caster Semenya is not eligible to run, be it domestically or internationally, following newspaper reports that she had been cleared by Athletics SA to do so.

Earlier in the week, Semenya’s coach, Michael Seme, had spoken of a schedule, starting next month, for the women’s 800m world champion, which included races that included the national track and field championships, as well as some global events.

The Star newspaper published a story yesterday, headlined ÔÇ£Caster gets ASA green lightÔÇØ, and quoted ASA communications manager Ethel Manyaka. However, SASCOC president, Gideon Sam, who was instrumental in the formation of an interim ASA Board following Leonard Chuene’s removal from office late last year, was quick to put the record straight.

ÔÇ£Let’s be very clear on one thing,ÔÇØ Sam said on Friday. ÔÇ£As things stand, Caster Semenya is not eligible to run in any sanctioned meeting or race. The matter over the results of her gender test are still sitting with the international parent association, the IAAF. They are still conducting their work and the process is ongoing. And we have to respect the privacy of the athlete, so any ‘confirmation’ is premature.

ÔÇ£SASCOC is waiting for the IAAF to consult with Caster Semenya on a personal level and the matter is between them and her. When things are resolved we will all be in a better position, but until the case is closed, it would be irresponsible for us to clear our world champion to compete again,ÔÇØ Sam said.

ÔÇ£Internally, following yesterday’s report, we are also clear that, 1) Semenya’s coach, Michael Seme, acted irresponsibly and without jurisdiction in saying she was going to compete against women in the forthcoming ASA season and, 2) the reporter from The Star newspaper was mischievious in his dealings with the ASA communications manager.

Sam joined interim board ASA chairman Ray Mali in saying that, ÔÇ£as things stand Caster is ineligible to compete, pending notification from the IAAF, which we are still waiting onÔÇØ. 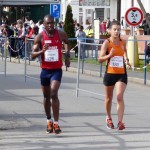 Oosthuizen closes in on SA record and Rio Games qualifying

By GARY LEMKE in Tokyo On the third day of staying in the Paralympic village bubble “it” finally dawned on me. “It” wasn’t the sheer visual aspect of the 4 000-plus Paralympians with disabilities all in the same environment of towering 17-storey apartments and surrounded by a 4km perimeter fence. Admittedly, that is the initial and most common conclusion of… END_OF_DOCUMENT_TOKEN_TO_BE_REPLACED