James Bond starred in the movie, The Man with the Golden Gun. In Johannesburg our para-athletics star Samkelo Radebe is now the The man with the Silver Arms.

Yes, double-arm amputee Radebe started training with his new silver prosthetic arms, courtesy of Ice Express, and admitted this week that it was going to take some getting used to, writes Mark Etheridge.

“It was so unusual, a total new work-out for my upper body,” Radebe told Road to London 2012. “I’m not sure how much they weight but suddenly with all this extension to my arms my whole body is in shock,” he laughed.

“It was a full session where I did 16 x 100m just to find my rhythm, each of them in about 14 seconds but boy did I feel it,” he said. “But I’ll get used to it. It’s to my advantage because almost all of the international guys use artificial arms. They really help in the final stages of the 200-metre event where you need every extra bit of leverage from your arms.”

Radebe, who represented Team SA at last year’s Commonwealth Games as well as at the recent IPC Athletics World Championships in New Zealand, had a successful Nedbank Athletics Championships for the Disabled in Rustenburg last month, winning the 100m, 200m and taking silver in the 4x100m relay in his category.

Thankfully his next big competition will be All-Africa Games in Maputo later this year. “Usually I would go overseas to compete in Europe now but this year I need to pass my exams. I’ve got exams in June and November again so my studies must get priority right now.

On the subject of his troublesome shin splints, Radebe said there was definite improvement. “The initial treatment plan was for an 18-month period and I’m about six/seven months into that now but now with the new arms I think it may roll out to about a two-year plan but at least there’s improvement,” he said.

LJ on track for Games 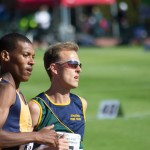 Cronje and other SA aces in Hengelo athletics action

By GARY LEMKE in Tokyo On the third day of staying in the Paralympic village bubble “it” finally dawned on me. “It” wasn’t the sheer visual aspect of the 4 000-plus Paralympians with disabilities all in the same environment of towering 17-storey apartments and surrounded by a 4km perimeter fence. Admittedly, that is the initial and most common conclusion of… END_OF_DOCUMENT_TOKEN_TO_BE_REPLACED