Rio Olympian Kirsten McCann rowed her way into history on Friday as she became the first SA woman to win World Championships gold.

The blonde bullet from Pretoria’s High Performance Centre won the lightweight women’s singles at this year’s World Champs being held in Sarasota-Bradenton, Florida (US).

She clocked 7min 38.780sec for the gold. After 2000 metres of power-rowing her victory margin was surprisingly comfortable as she beat Netherlands rival Marieke Keijser by 2.22 seconds.

At 1500m she’d pulled back to second spot just behind Keijser, and over the final 500m was untouchable as she won the rainbow nation’s second World Champs gold, three years after London 2012 gold medallists James Thompson and John Smith (in the fours) won the doubles event.

Best-ever World Championships time for the women’s lightweight skulls is the 15-year-old mark of 7:28.89 set by Bulgaria’s Viktoriya Dimitrova in Seville, Spain, while the world-best is by Kiwi Zoe McBride (7:24.46), set at a World Cup event in Varese, Italy, two years ago.

Having turned 29 just over a month ago, McCann was the second oldest starter in the A-final, only American Mary Jones being older at 31. Jones got bronze on Friday, and fittingly she and McCann share the same birthday.

Conditions were hot and well-suited to quick racing as air temperatures topped 30C.

McCann, though, was as cool as a cucumber.

‘I had an ideal race plan for today,’ she told the FISA website. ‘I knew in the last 250m it would be really, really tight. So I am happy to have been able to sprint effectively. It’s really cool.’

Back home in SA sports fans would say it’s both cool… and hot news!

Recently the Florida west coast was battered by Hurricane Irma, but on Friday it was all about Hurricane McCann.

Picture of McCann on the victory podium courtesy of FISA 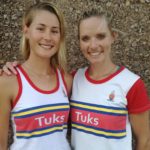