The South African track and field duo of Akani Simbine and Ruswahl Samaai both posted impressive results in Sweden on Wednesday as the build-up to next month’s IAAF World Championships continued.
New South African 100-metre record holder Simbine dashed to a double sprint win with times of 10.09 and 20.64 seconds for the 100 and 200m respectively at the Karlstad Grand Prix meeting.
‘Yeah I’m ready for World Championships now… just need to train and sharpen up,’ Simbine told Road to Rio 2016 and went on to say that conditions and a slight injury issue conspired against fast times.
‘Conditions were certainly not ideal for running fast times. Apart from the cold, there was also a crazy windy. But my main concern before each of my races was not the weather conditions.
‘I have a slight niggle in my right hamstring. It is nothing to be concerned about yet, but I could not help being worried when I lined up for a race. In spite of not having the best of starts in the 100 metres, I was able to relax and put together a good race which enabled me to have a strong finish,’ the Tuks/HPC athlete said.
‘I will admit that I was slightly apprehensive before racing the 200 metres because I was not sure whether my hamstring would hold up till the end. Another reason for concern was that it was the first time since the SA Championships that I competed in the 200 metres. It was quite a relief to come through the race unscathed.’
It’s Simbine’s last race before World Championships.
Meanwhile in the long jump Commonwealth Games bronze medallist Samaai leapt 7.88m for silver spot. Now, while that effort may not seem overly impressive in the grander scheme of things it must be remembered that he’s been out of action, injured for around 10 weeks now.
And he was happy to admit that he was shaking from sheer nervousness before his leap.
‘To be honest, at first I was nervous because I haven’t been jumping in a while. I was actually shaking,’ he laughed. ‘But my body felt very good while jumping. I was just getting tired. Heading into the actual competition I totally forget about my injury. I knew that I had to get it out of my mind as soon as possible otherwise I wouldn’t be able to give it my all. I’m very happy with my distance – 7.88 is a really good start. From now on the only way will be up.
‘I’m healthy which is the most important thing and very grateful to be back on the circuit. I’ve really been struggling with a grade one hamstring strain. Normally a strain takes two weeks to recover but mine took me 10 weeks due to the fact that I also damaged a bit of tissue. I lost a lot of hope and faith but God’s plan and timing is perfect and he’ll reward me for everything I gone through.
‘Like I said I’m just happy to be back. Lots of work that still needs to be done but I’m willing to put all the hard work and sacrifices in once again. So grateful to be back again.’
Looking forward and Samaai is not 100% certain when his next jump will be. ‘I still have to talk to my coach (Jenny Kingwill) and agent (Peet van Zyl) about that.’

Meanwhile, this weekend’s Diamond League meeting in London sees nine more South Africans in action as the World Championships get ever closer.
The meeting will be contested over two days and Friday has Wenda Nel taking on world champion Zuzana Hejnova for the third time this season.
Anaso Jobodwana, whose SA record was broken by Wayde van Niekerk recently, lines up in the 200m and Elroy Gelant goes off in the 3000m.
A mouth-watering clash will come on Saturday when SA’s finest 400m hurdlers, LJ van Zyl and Commonwealth champion Cornel Fredericks clash for the first time this season. Van Zyl is having a super-solid season and busy working on a number of minor issues that can only see him getting quicker, while Fredericks is racing only his second 400m hurdles race in many a month after Achilles tendon problems.
Van Niekerk, the new 400m national record holder runs the one-lap, and Commonwealth silver medallist Zarck Visser is in the long jump after also being out for around two weeks with a swollen ankle. In the
women’s javelin, world rankings leader Sunettte Viljoen continues her own build-up to Beijing. 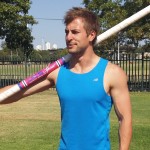 Another record for Bolt

By GARY LEMKE in Tokyo On the third day of staying in the Paralympic village bubble “it” finally dawned on me. “It” wasn’t the sheer visual aspect of the 4 000-plus Paralympians with disabilities all in the same environment of towering 17-storey apartments and surrounded by a 4km perimeter fence. Admittedly, that is the initial and most common conclusion of… END_OF_DOCUMENT_TOKEN_TO_BE_REPLACED