Our national fencing side to take on the continent’s finest at the All Africa Fencing Championships in Cape Town next month has been announced.

The team will be made up of 24 fencers in three different disciplines ÔÇô epee, sabre and foil.

Four men and four women will represent South Africa in each division. The championships will be fought out from 25-29 June.

The SAAFA Executive said in a statement: “The Executive is responsible to select in consultation with all role players and in terms of the Selection Policy a team that would represent South Africa in a responsible and competent way in international events. In selection, the Executive took into consideration not only the partial interest of the fencing community but also the requirements set by SASCOC and national interest. National interest is best served by selecting the strongest team possible who would be able to win medals.

The team is a mixture of youth and experience with husband and wife Mike (epee) and Elvira Wood (sabre) having represented Team South Africa at the 2008 Beijing Olympics, along with Sello Maduma.

The full team is: 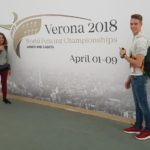 Bester pumped to take on the world’s best

SA fencer makes her point in the US

Tokyo looms, again, We don’t know for sure in what shape of form the Olympics and Paralympics will take place in July to September and if anything 2020 taught us to take nothing for granted. What we do know is that if Tokyo 2020 +1 does go ahead, it will do so against a new-found back drop where simply taking… END_OF_DOCUMENT_TOKEN_TO_BE_REPLACED