Statement from South African Sports Confederation and Olympic Committee [SASCOC] President Gideon Sam on the decision to suspend Athletics South Africa’s membership as per Clause 9.3 of SASCOC’s Articles of Association: ÔÇ£Powers and duties of the BoardÔÇØ.

Clause 9.3.1.5: ÔÇ£suspend, fine and terminate the membership of any individual affiliated through their respective National Sports Federation to SASCOC or to suspend or fine any National Sports Federation or Member who infringes the Constitution, directives or resolutions of SASCOC, or engages in any misconduct, improper practices, misdemeanor, acts of defiance, or brings SASCOC into disreputeÔÇØ.

‘SASCOC has done its utmost best to restore order and sanity during the debacle at Athletics South Africa [ASA]. Mr James Evans was impeached by his federation. He suspended seven board members unconstitutionally. SASCOC attempted to investigate the alleged irregularities through administrator Zola Majavu. SASCOC’s untiring efforts to correct the maladministration in ASA; and not to support the attempts of Mr Evans to regain the presidency of the federation which impeached him by a vote of 33 to 1 with 4 abstentions, has been hampered by the International Association of Athletics Federations [IAAF].

‘We have engaged with the IAAF verbally, in writing and via a meeting in Lausanne, Switzerland on 15 June 2013. It has been evident that the IAAF does not recognise SASCOC as a sports authority in South Africa. The IAAF would rather support ASA, which has no leadership, given the fact that Mr Evans suspended seven board members.

‘Using the avenue of support from the IAAF, Mr Evans called a meeting on Saturday [22 June 2013], which was attended by 8 of the 17 South African regions. He is in the media space that they are now in order.

‘Therefore, SASCOC has decided on the following steps, given the above situation:

1. ASA can continue to engage with the IAAF on the functioning and administration of the sport.

2. The membership of ASA as a national federation, under the regulation of SASCOC, is hereby suspended with immediate effect.

‘At this juncture SASCOC has decided that athletes of ASA will not be included in future Team South Africa squads for the Commonwealth Youth Games, Commonwealth Games, ANOCA Youth Games, Zone VI Games, All Africa Games, Olympic Youth Games and the Olympic Games.

‘It must also be noted that all athletes registered with ASA will be removed from SASCOC’s Operation Excellence [OPEX] programme with immediate effect.’ 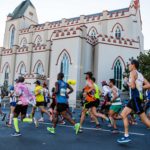 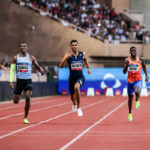