Top-ranked Chani Scheepers is through to the second round of the $220,000 PTT Pattaya Open in Thailand.

Our leading women’s singles tennis player, ranked 80th in the world, went past Tatjana Malek in the first round, beating the 134th ranked German in straight sets, 7-6 (4) 6-2, writes Mark Etheridge.

In a match lasting 1hr 27min Scheepers had a first service percentage of 68% compared to her opponent’s 53%. There was just one ace served in the match, by Malek but the German had three double faults compared to just one by Scheepers.

Twenty-six-year-old Scheepers picked up $1825 for her victory and now comes up against Uzbekistan’s Akgul Amanmuradova in the next round.

The two have become frequent opponents in the recent times, facing off on five occasions in the last year with the big Uzbekistani (she stands 1.90m tall) holding a 3-2 advantage in victories. Scheepers has won two of their last three meetings though, in the French Open last year where she went on to make the fourth round and also in San Diego.

Amanmuradova, currently ranked 72nd in the world, won their last clash, at the US Open, winning 6-3 6-4.

In the first round at Pattaya, Amanmuradova beat seventh seeded Jie Zheng of China which will give her confidence.

Kevin in second round 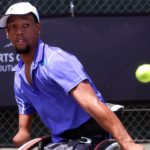 Sithole and teammates back from US tour

Tokyo looms, again, We don’t know for sure in what shape of form the Olympics and Paralympics will take place in July to September and if anything 2020 taught us to take nothing for granted. What we do know is that if Tokyo 2020 +1 does go ahead, it will do so against a new-found back drop where simply taking… END_OF_DOCUMENT_TOKEN_TO_BE_REPLACED