Ever-dominant Caster Semenya was the highlight of the South African action on the final day of the African Championships in Asaba, Nigeria on Sunday.

Semenya added to her 400m gold that she won earlier in the competition as she clipped 0.30 seconds off Mozambican Maria Mutola’s 1993 African 800m record.

Semenya’s new mark stands at 1min 56.06sec, which improved on the 1:56.36 record run at the African Championships in Durban 25 years ago. Burundian Francine Niyonsaba took silver in 1:57.97 and Bayih Habitam Alemu of Ethiopia took bronze in a time of 1:58.86.

Semenya’s medal was one of three gold medals won by South Africa as the rainbow nation ended second behind Kenya on the medals table.

SA won nine on the final day of the five-day competition, bringing the total to 30 (nine gold, 13 silver and eight bronze).

The other golds went to sprinter Ncincilili Titi who won the 200m, charging over the line in 20.46sec, with Luxolo Adams bagging bronze in 20.60 and missing out on silver by less than 0.01 seconds.

‘I knew it was going to be tough so I just did everything I could to be prepared and be strong mentally so I could overcome any challenges,’ Titi said. ‘It was a great experience and a memory I will cherish for a long time.’

Adding another double to the team’s tally, Ischke Senekal won the shot put with a 17.24m effort, and Mieke Strydom earned bronze with a 15.99m throw.

Photo: Semenya and the silver and bronze medal-winners by Pius Utom Ekpei/AFP/Getty Images 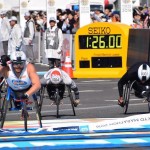