South Africa’s Jordy Smith has increased his lead at the top of the Jeep Rankings Leaderboard after finishing runner-up to Brazil’s Filipe Toledo in the final of the Hurley Pro Trestles, stop No8 of 11 on the 2017 World Surf League (WSL) Championship Tour (CT).

In a wave-starved final in San Diego, California, Smith’s strategy of waiting for the bigger waves saw him record  the highest score of the 35-minute encounter, a 9.0 out of 10,. But Toledo stayed busy and racked up scores of 8.0 and 7.67 to secure his first title at Trestles and in the process became the first male CT surfer to win two events this year.

‘I would’ve liked to get a couple more waves in that heat, but today wasn’t my day, unfortunately, and Filipe [Toledo] just surfed really well,’ Smith said. ‘I went out there with a strategy and executed it pretty much as perfectly as I could. But in surfing there are some things you can’t control and that’s Mother Nature. In those 35 minutes I just didn’t get a second chance.

‘Now I’ll just try to focus on the next event and live every moment for what it is and what’s to come. It’s time to get ready for Europe where it’s very happy-go-lucky and I like roaming those lineups and just being there.’

Smith, who came into the event ranked No1, 950 points ahead of 2016 world champion John John Florence of Hawaii, earned US $50,000 (approx R650,000) and 8,000 points at Trestles. The Durbanite is now 2,450 points ahead of Florence, who remains rankings runner-up following his defeat by Toledo in the semi-finals, and 8,650 points above No3 Julian Wilson of Australia.

Toledo put on spectacular performances for the San Clemente crowd with his powerful turns and big airs throughout the event. The Final Series witnessed Toledo continue to turn up the heat en route to the fifth CT victory of his career.

‘Finally! This is a very special moment right now,’ said Toledo. ‘I always get stopped in the semis and beating Jordy [Smith], the one who beat me last time, is an incredible feeling. I’m so thankful for all my friends to be here and thank God for all the waves he sent to me. This event is always so entertaining to watch. I’m so excited to win with my friends and family all here.’ 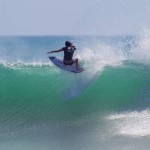 Surfers Smith and Buitendag fly SA flag Down under 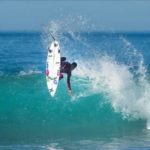 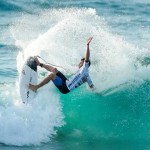 SA duo Smith and De Vries into Last 16 in Ballito

Tokyo looms, again, We don’t know for sure in what shape of form the Olympics and Paralympics will take place in July to September and if anything 2020 taught us to take nothing for granted. What we do know is that if Tokyo 2020 +1 does go ahead, it will do so against a new-found back drop where simply taking… END_OF_DOCUMENT_TOKEN_TO_BE_REPLACED