Moodie and Belgian veteran Dick Norman are now through to the semi-finals with their 7-6 (9) 4-6 7-6 (7) 5-7 6-4 win against the fourth-seeded pairing of Mahesh Bhupathi (India) and Mark Knowles (Bahamas).

The drawn-out victory was less than a day after Moodie and Norman had beaten the Romanian pair of Andrei Pavel and Horia Tecau in another five-set clash of more than four hours.

But the reward is a semi-final date against the top-seeded Bryan brothers, Mike and Bob Bryan.

The latest victory for Moodie and Norman continues their fine run of form as the pair recently reached the final of the French Open and Moodie, a member of Sascoc’s OPEX squad for the London Olympics, 2012 had appeared in four successive ATP finals going into the Wimbledon tournament – including victories in the last two of these events.

With Davis Cup squad members Kevin Anderson, Jeff Coetzee and Rik De Voest all eliminated from the doubles with overseas partners in the early stages of the tournament, Moodie is SA’s last hope of victory in the tennis’s blue riband event.

Kevin kicks off in Oz 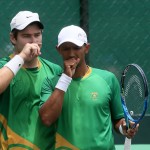 Klaasen/Roelofse bounce back to give SA the win

By GARY LEMKE in Tokyo On the third day of staying in the Paralympic village bubble “it” finally dawned on me. “It” wasn’t the sheer visual aspect of the 4 000-plus Paralympians with disabilities all in the same environment of towering 17-storey apartments and surrounded by a 4km perimeter fence. Admittedly, that is the initial and most common conclusion of… END_OF_DOCUMENT_TOKEN_TO_BE_REPLACED