Medal hopefuls for the 2012 Olympics in London, our top sprint canoeists Shaun Rubenstein and Mike Arthur are already reaping the benefits of relocating to Cape Town a year ago, writes Mark Etheridge.

Rubenstein and Arthur moved from Johannesburg and Durban respectively to give themselves the best possible shot at an Olympic medal and Rubenstein is convinced the move is working.

“Mike and I have already had some good improvements this year from last so we are really looking forward to the first time that we can race and see just how well we are going.

“For now we are heavily into our base phase with the major focus being on our strength, both in the gym and on the water. From next month (Feb) we are going to start more specifice water training as we get closer to the races.

“We haven’t spent that much time on the water as its still early on in the season, but the speeds we are getting on the water already is matching our speeds that we got up to last year. The biggest improvements are in the gym. Our strength currently is a lot higher than our strength the same time last year.”

Exciting news for the duo is that they’ll have some high quality training partners joining them shortly. “Our first races are only in April but the German sprint squad, including Olympic champion Ronny Rauhe and a coach, is coming out to train with us again and will spend six weeks here so that will definitely help us a lot with our training.”

“Some other interesting news potentially,” says Rubenstein, “is that Tim Brabants, 1000m Olympic champion from Beijing has bought a house here in Cape Town and has been training here. His plan for the next two years is to live six months here and six months in the UK building up to the Olympics and then move out here after the Olympics again.”

Surfski aces trade ocean for river at ‘the Fish’ 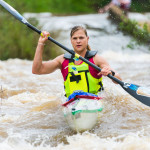 Olympian Hartley ready for next step of her Duzi preparations

Tokyo looms, again, We don’t know for sure in what shape of form the Olympics and Paralympics will take place in July to September and if anything 2020 taught us to take nothing for granted. What we do know is that if Tokyo 2020 +1 does go ahead, it will do so against a new-found back drop where simply taking… END_OF_DOCUMENT_TOKEN_TO_BE_REPLACED